When a company is so smart that it realizes it can “capitalize” on socialism by making fun of it in a board game that you can buy, capitalism smiles.

Toy maker Hasbro has come out with yet another version of their iconic board game “Monopoly.” But this time, instead of the focus going towards millennials, Hasbro put the never successful ideology of socialism in their crosshairs.

The new game, aptly titled “Monopoly Socialism,” comes with a tagline that is sure to make any far-lefty’s blood boil.

“Winning is for capitalists,” the game’s tagline reads.

The game is geared for adults and is already the number one best-selling board game on Amazon. “Monopoly Socialism” has sold so quickly that you can only purchase it on Amazon through third-party sellers.

According to the game’s description on Amazon:

Get ready for laughs as the twists and turns of life put a damper on working toward a shared, utopian society. Cooperation isn't always what it's cracked up to be. In the Monopoly Socialism game players move around the board working together to make a better community by managing and contributing to projects such as a no-tip vegan restaurant, an all-winners school, or a museum of co-creation. But nobody said that cooperation is easy! Drawing a Chance card presents the flip side of striving for the perfect utopian society. You'll have issues with your neighbors, your DIY community projects go awry, you're constantly voting to shake things up, and there's always an emergency that requires dipping into the Community Fund! Contribute all 10 of your chips to win the game, unless the Community Fund runs out of money and everyone loses. So much for a socialist utopia.

From the “no-tip vegan restaurants” to the “all-winners school,” there’s something in this game for the capitalist in your family!

The game really gained steam when Rutgers University history professor Nick Kapur tried to slam the board game by calling it “mean spirited and woefully ill-informed.” Kapur told his followers, and the rest of the Twitterverse, that he purchased the game “so you don’t have to.”

I won’t post each section of Kapur’s thread, because there’s isn’t enough room on this website for that much “woefully ill-informed” analysis. But, click on the initial tweet below to see the entire thread:

I bought a copy of Hasbro's mean-spirited and woefully ill-informed "MONOPOLY: SOCIALISM" board game so you don't have to - a thread 1/ pic.twitter.com/YhZWDjkAnj

I’m not sure which part of the thread was the funniest, but Kapur really did a great job of selling the game.

Sen. Ted Cruz (R-Texas) retweeted Kapur’s thread with both criticism of Kapur’s stance on the game and suggestion for future versions of “Monopoly,” including the “University edition.”

You can check out Cruz’s tweets below: 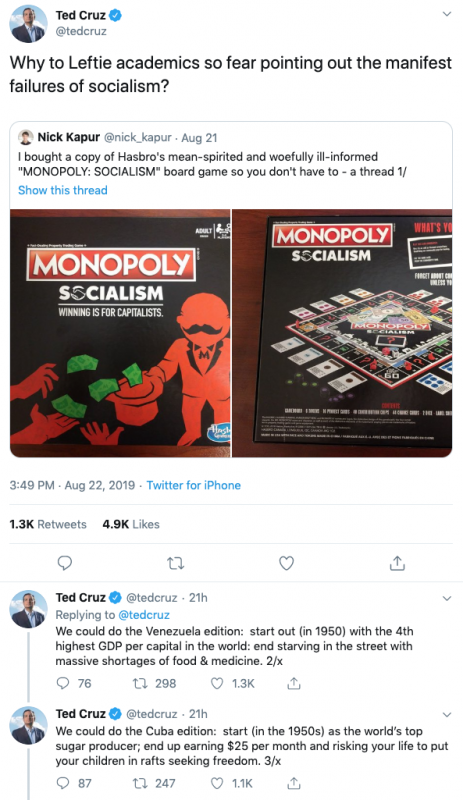 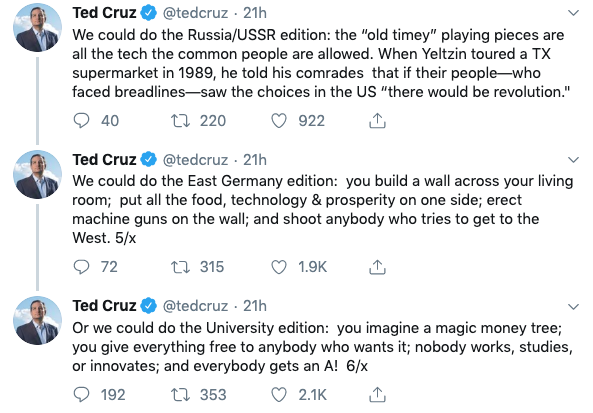 Hey, maybe one day we’ll get “Monopoly Communism,” where you’ll have to stand in line for four hours to buy each individual piece of the game.