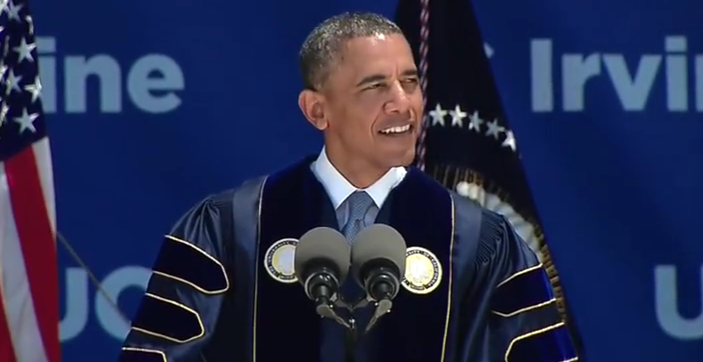 People always say that college is a place for the free exchange of ideas.

In spite of that, institutions of “higher learning” have become nothing more than indoctrination centers for the Left as safe spaces, inclusivity and gender-neutral bathrooms seem to have been the theme for the past school year.

Using U.S. News & World Report’s list of top 100 universities in the United States, Campus Reform looked into just how skewed those universities really are based on the political leanings of their chosen commencement speakers.

According to the study, 50 of the top 100 schools have either not announced a speaker for this year’s graduation festivities, or the colleges have enlisted a speaker that does not have any affiliation with either ideological platform. That's kind of encouraging.

However, the remaining 50 schools that did or do have a speaker for this year’s graduation ceremony have taken political stances one way or the other, and the results are astounding.

Campus Reform concluded that liberal speakers outnumber conservative speakers by a staggering four to one.

Campus Reform found that 40 of this year’s commencement speakers espouse liberal philosophies. Only ten, however, champion conservative ideologies, meaning this year’s liberal speakers will outnumber conservatives at a rate of 4 to 1.

Although most people are somewhat aware of the liberal bias on college campuses, this report makes it pretty clear that the inmates are running the asylum.

The top 10 universities alone showcase eight liberal speakers and two non-affiliated speakers. Actually, there are no conservative speakers on the list until university #25, where Oracle Corp. founder Larry Ellison was invited to speak at the University of Southern California.

On a sidenote, all eight Ivy League schools can be found in the top 15 of the U.S. News list. Not one of those schools has a conservative speaker for this year’s graduation. Three of the upper-echelon schools chose a speaker that does not have any clear political affiliation. The other five Ivy League schools, which are all among the top 10 universities, have invited liberal speakers.