Students Protest To Demand Resignation of Professor For Opposing Segregation 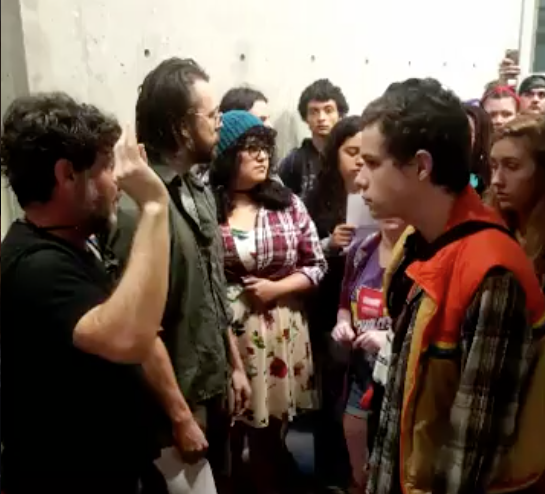 Students at Evergreen State College are calling for the resignation of an allegedly “anti-black” professor after he objected to a school-sanctioned event calling for whites to leave campus for the day.

According to Evergreen State College’s description of the Day of Absence and Presence, the multi-day event is dedicated to “address current issues surrounding race at Evergreen and beyond.”

The details of the Day of Absence instructs students to choose between attending events on campus, reserved for “people of color,” or to go off-campus if they identify as being from a “majority culture or white perspective.”

Evergreen State College’s student publication, the Cooper Point Journal, confirms that 2017 was the first year in which white students were told to leave campus because of their race.

Weinstein said his email was a “formal protest of this year’s structure” and that he “would encourage others to put phenotype aside and reject this new formulation,” as “one’s right to speak—or to be—must never be based on skin color.”

According to the College Board, Evergreen State College is 66 percent white.

Upset over Weinstein’s comments, students confronted him and called for him to resign.

“There is a difference between debate and dialectic,” Weinstein told the protesters.

“We don’t care what terms you want to speak on,” a student shouted back. “This is not about you. We are not speaking on terms, on terms of white privilege. This is not a discussion. You have lost that one.”

Another student said, “You said some racist shit. Can you apologize?” to which Weinstein replied that he did not say anything racist.

Asked to resign, Weinstein stated definitively that he is not resigning.

After hearing Weinstein will not be resigning, students began chanting, “Hey-hey! Ho-ho! Bret Weinstein has got to go!” before marching.

A video taken by a student shows students screaming at a police officer reportedly during the march.

The Olympian reports on May 24, the day after the students protested Weinstein, hundreds of students surrounded Evergreen State College president George Bridges’ office to protest against alleged racism on campus.

Freshman Shayna Clayton said, “This institution is really (messed) up and racist,” adding, “We shouldn’t have to deal with that.”

Protesters shouted things such as, “Hey-hey! Ho-ho! These racist teachers have got to go!”

A group of protesters, claiming to speak on behalf of the students, said they were protesting “dismissal of the rights of students and femmes of color, physical violence by police, and false sentencing of students protesting.” According to the protesters, “black trans disabled students” are “constantly” questioned by police:

What started out as anti-black comments on social media has turned into the dismissal of the rights of students and femmes of color, physical violence by police, and false sentencing of students protesting. Black trans disabled students are actively being sought out and confronted by campus police constantly, police are refusing to explain their actions and harassment. Students will not stand for this anymore, as students of color have never felt comfortable on campus and have not been treated equally.

Weinstein tweeted police on campus told him that he was not safe on campus during the protests. 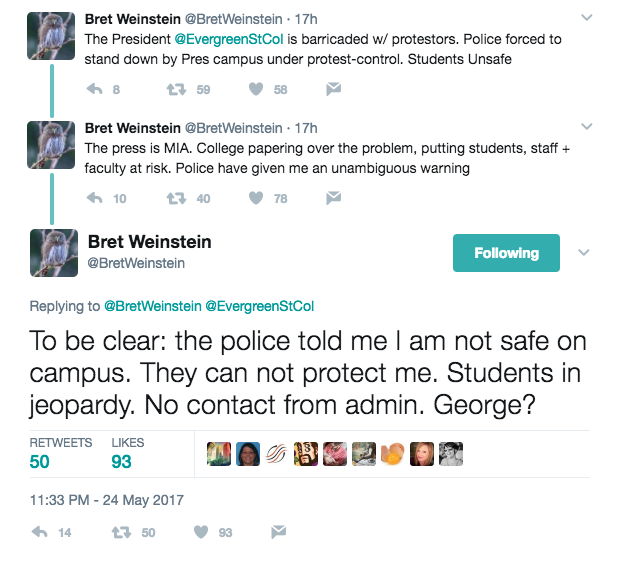 Despite Weinstein being told he wasn’t safe on campus, spokesperson Zach Powers told the Olympian the protests have been “intense and useful”:

It’s been an intense and useful conversation with a group of students. The college is working with the group to address their issues. This type of conversation is being replicated across the country right now. We remain committed to providing a great education to all students.

Although Powers said the college is dedicated to “providing a great education to all students,” Weinstein tweeted his students were being threatened for recording the student protests: 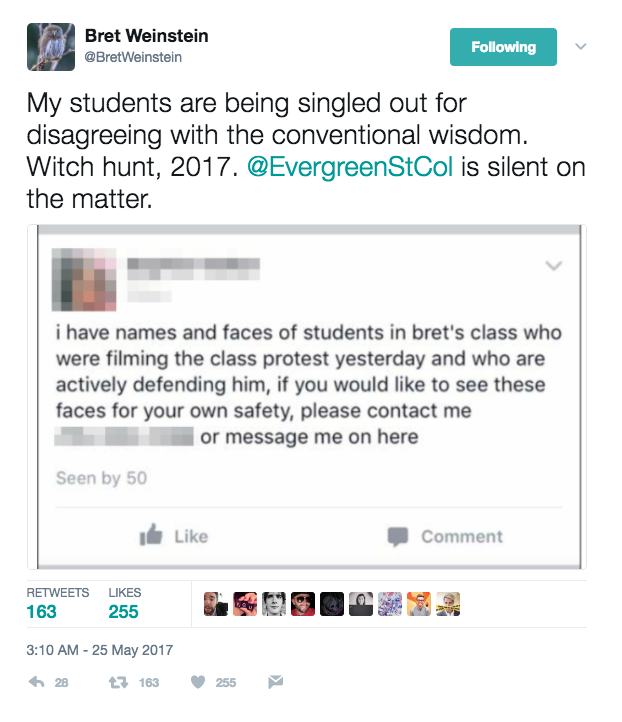