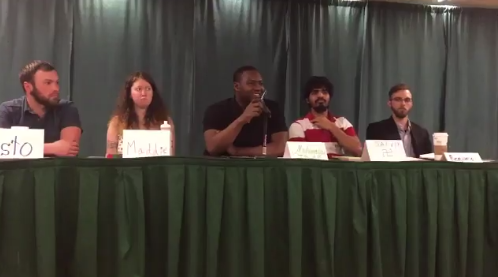 An editor of Portland State University’s student newspaper was fired after posting an exchange on his Twitter account in which a Muslim student detailed the punishment for apostates in Islamic countries.

According to his piece in National Review, Andy Ngo, a former multimedia editor for the Vanguard, posted a clip from an interfaith panel discussion, during which a student asked the Muslim panelist about whether the Quran calls for killing non-Muslims.

The Muslim panelist responded by saying it is considered a crime in Muslim countries to follow any religion other than Islam and that non-Muslims have the option to leave (or, presumably, face death), adding:

And some, this, that you’re referring to, killing non-Muslims, that [to be a non-believer] is only considered a crime when the country’s law, the country is based on Koranic law — that means there is no other law than the Koran. In that case, you’re given the liberty to leave the country, you can go in a different country, I’m not gonna sugarcoat it. So you can go in a different country, but in a Muslim country, in a country based on the Koranic laws, disbelieving, or being an infidel, is not allowed so you will be given the choice [to leave].

.@Portland_State Here is full clip that I recorded. An audience member asked about Quran 5:51 & "infidels." He summarizes Quran 5:32 just before video starts pic.twitter.com/7FMgsPbFR6

Although Ngo was not on assignment at the time, Ngo’s editor-in-chief called him into a meeting to discuss his coverage of the event, which had since been featured on Breitbart.

Ngo’s editor-in-chief, Colleen Leary, reportedly accused him of being “predatory” and “reckless.” Leary allegedly stated quoting the speaker’s comments about the killing of infidels in Muslim countries would threaten the speaker’s life and family. Another person at the meeting reportedly said Ngo should have taken the “current political climate” to heart before posting the clip of the event.

Leary issued a response to Ngo’s story in National Review by accusing Ngo of violating ethical standards set forth by the Society of Professional Journalists by paraphrasing the speaker in quotes (despite Twitter’s character rule).

Despite Ngo providing a video clip of the full exchange, Leary said she is still concerned with the “careless oversimplification” in Ngo’s tweet that allegedly creates a “potential danger” for the Muslim student:

I am disheartened by the continued lack of acknowledgement or concern for the careless oversimplification of the panelist’s comments and the potential danger in which he placed a student in his own community. A person’s religious identity or otherwise should never be a factor in whether or not we report full, ethical truths within the necessary context.