It’s like people on the far-left never get sick of putting their feet in their mouths. We constantly get bombarded with “truths” those on the left are so sure of…aaaaand then they get owned with the actual truth.

The former U.S. congressman from Minnesota also made a plea for “someone” to send him “an example of a ‘Bernie Bro’ being bad.

While the “Twitterverse” brought up multiple examples of the poor behavior of some Sanders supporters, the best response came on Thursday from someone who has felt firsthand the wrath of a supposed Sanders supporter. 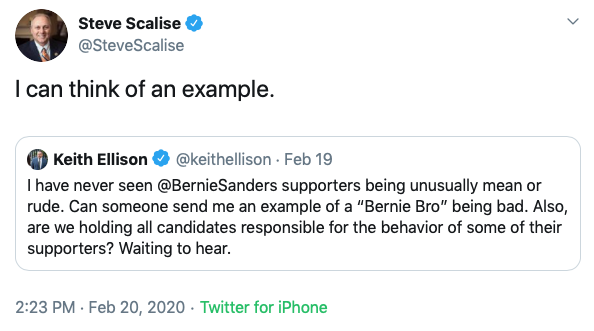 Scalise was shot in 2017 by left-wing activist James T. Hodgkinson during practice for a Congressional baseball game. Hodgkinson was a staunch supporter of Sanders, and a volunteer on his 2016 presidential campaign.

After news broke of Hodgkinson’s support for Sanders, the senator disavowed Hodgkinson, calling his actions “despicable,” and saying that “violence of any kind is unacceptable in our society.”

It’s all well and good that Sanders condemned Hodgkinson’s actions. But, whether they’re supporters of Sanders or just far-left zealots like those in the violent communist group Antifa, violence and harassment seems to be the modus operandi against people far-leftists disagree with.