Stephen A. Smith Delivers Most Aggressive Rant Yet on Kaepernick 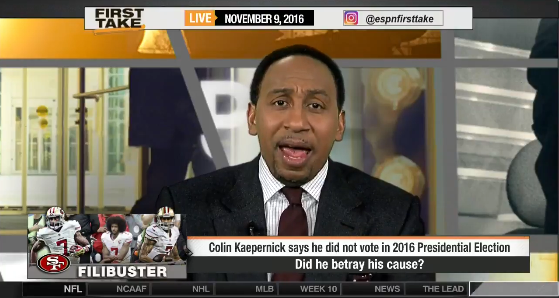 San Francisco 49ers quarterback Colin Kaepernick—relevant for his national anthem protest against police brutality—recently made the news again for telling reporters he had no intention of voting in the 2016 presidential election.

ESPN First Take’s Stephen A. Smith, an outspoken journalist and TV personality, had quite a bit to say about Kaepernick’s decision on Wednesday in what may be his most vicious tirade yet.

And that was just the beginning, as Smith only got more heated.

Watch the fiery speech below:

"For him not to vote...as far as I'm concerned, everything he said meant absolutely nothing!"