The U.S. Olympic women's BMX team just got a whole lot more macho! A man is now in prime position to steal a spot from a woman on the U.S. freestyle cycling team. Chelsea Wolfe is expected to become the first transgender athlete to make a U.S. team, at the Summer Olympics in Tokyo next month. 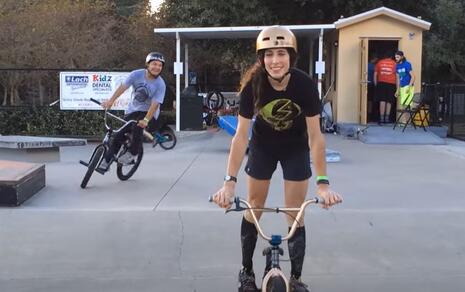 In 2014, Wolfe suddenly decided that he was not a man, but a woman. And presto, he’s a woman who defies the laws of biology! One who currently ranks third among female American BMX competitors. The two women ranked ahead of him will compete in Tokyo, and Wolfe will serve as the alternate, as things stand now.

‘‘I’m a BMXer first and a trans woman somewhere after that, but they are both a critical part of my life,” Wolfe told SBNation Outsports, a cheerleading media site for LGBT athletes.

“It’s honestly slowly processing little by little how exciting that is,” Wolfe continued. “I don’t think I’ve fully wrapped my head around how exciting it is, and how incredible it is to make it so far with this wild dream of mine that I’ve dedicated my life to for the past five years.”

Somewhere, the woman getting edged out for the Olympics is saying just the opposite. How incredibly devastating it is that she was blocked from achieving her wildest dream to make the women’s Olympic team … by a man.

Karleigh Webb, the Outsports writer, said Wolfe’s “trailblazing triumph” is a “sweet climax” that comes at a critical time because transgender youth are targets of a national wave of anti-trans legislation. That includes passage of a ban on transgender participation in scholastic and collegiate sport in Wolfe’s home state of Florida last week.

Wolfe said he is a victim of “transphobia” and is aware that his “truth” is a message of success that benefits others (suffering from gender confusion):

“You are valuable and valid, and your rights are just as important as anyone else’s and we’re not going to let anyone take that from you. If you can live life openly as yourself in a world so hostile to your existence, then you already have the strength of a champion.”

Male athletes claiming transgender status are eligible to compete in the Olympics if their testosterone levels remain low enough for a year. International sports federations also have a say in eligibility rules for men trying to qualify for women’s teams.

Transgender athletes are not required to gain legal recognition of their gender identity, and they do not have to undergo anatomical surgery to gain eligibility.

That ancient thinking is “sickening”, Wolfe says. He also accused conservative state legislators of trying to “stop elite trans athletes from existing in the first place by preventing us from getting into sports at all.”