State Dept.: Jobs-for-Terrorists Comments May be ‘Too Nuanced for Some’

Invited on to CNN’s The Situation Room with Wolf Blitzer to clarify her earlier statement that “a lack of opportunity for jobs” was the driving force behind terrorism, State Department spokesperson Marie Harf only dug her grave deeper yesterday by saying that her comments “might be too nuanced an argument for some.”

Wolf Blitzer started with a softball, quoting Harf’s comments and asking her what the “'root causes that lead these young men, mostly men, some women, to go and join ISIS, or al Qeada, or al Shabbab, or these terrorists groups’ – give us a little perspective of what you were talking about.”

Harf started her response petulantly, “I’m not the first person to say something like this.”

“Military commanders that we’ve had throughout many years here fighting this war on terrorism have said the exact same thing: that in the short term when there’s a threat like ISIL, we’ll take direct military action against these terrorists. We have done that," she said. "We are doing that in Iraq and Syria. But longer term, we have to look at how we combat the conditions that can lead people to turn to extremism.”

“If you think about if there’s a radical jihadi on the internet who’s putting out hateful videos, that’s powerful and dangerous, right?” she said. “But if there’s ten thousand men in a country who are willing to blow themselves up because of what that person says on the internet, that’s much more dangerous.”

This answer sounds as if it came fresh-out-of-the-can for the video-caused-Benghazi hoax. Has there been a terrorist attack actually caused by a video on the internet?

But never mind that, Harf has more pop-psychology to offer as State Department strategy:

“How do you get at those ten thousand people? …how do you get them not to pick up the AK-47 and instead do something more positive with their life? That’s what we’re trying to get at in this summit – looking at the long term problem, not just the short term one," said Harf.

“So you suggested that maybe if you find these young men jobs, they might not become terrorists, right?” said Blitzer.

But that is exactly what she said just the day before to Chris Matthews: “We need in the medium to longer term to go after the root causes that leads people to join these groups, whether it’s a lack of opportunity for jobs.”

Harf also tried to obfuscate by saying that others have pointed to economic issues, “lack of governance” and lack of opportunities as “root causes” for terrorism.

Somewhat incredulous, Blitzer responded: “But you know of course that some of the best known terrorists out there came from wealth, and privilege, with higher education, degrees, whether Mohammed Attah or bin Laden himself?”

“Absolutely!” said Harf. “…part of it is military – absolutely! We are taking direct action against ISIL in Iraq and in Syria. But look, if we look around the world and say longer term, we can’t kill every terrorist around the world, nor should we try.”

Harf: “How do you get at the root causes of this? It might be too nuanced an argument for some, like I’ve seen over the last 24 hours some of the commentary out there, but it’s really the smart way that Democrats, Republicans, our partners in the Arab world think we need to combat it.”

Blitzer asked her how she deals with the criticism her comments have received, and she says blithely, “I don’t read it,” as if she had not said a minute earlier that she’d seen “some of the commentary out there.”

Not only that, but Harf has been using Twitter to defend her comments, citing generals and even former president George W. Bush:

And let's not forget George W Bush's comments on CVE: “We fight against poverty because hope is an answer to terror": http://t.co/Du68tsrjHd 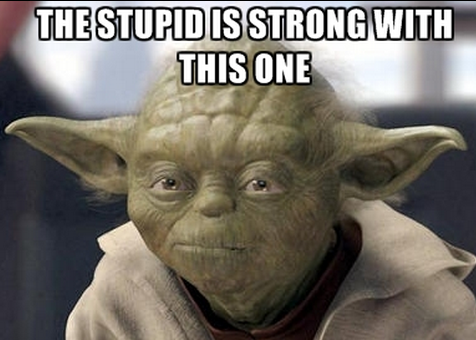