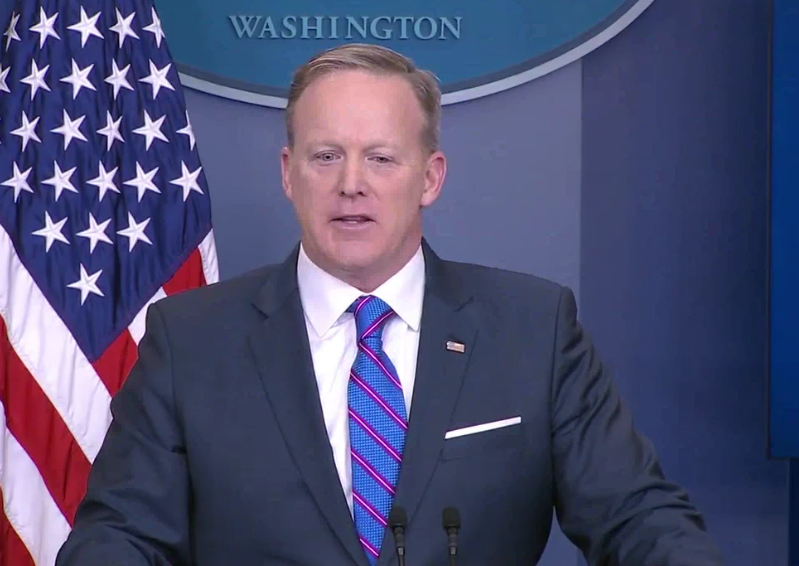 During the press conference, Spicer was asked about a tweet President Trump made on Tuesday morning about Flynn’s resignation. In his tweet, Trump asked, “The real story here is why are there so many illegal leaks coming out of Washington? Will these leaks be happening as I deal on N.Korea etc?”

Spicer defended Trump’s tweet by saying, “It is about leaks!” He explained the “real story” should be how government officials, throughout different administrations, have been improperly handling classified information:

When you think about this, understand that all of this information was leaked. I mean—and again I know we’ve got this, me lecturing you about what stories should be—but I think that there’s a real story here. The idea that not just in this administration, but the Obama administration, going back to the Bush administration and back, that we have an issue where classified information—of which this would be—is handled in such a way that it is being given out. And I know in some cases it’s a good story, and I understand that and that’s to some degree your responsibility to write that. But I think there’s also a story here where the amount of leaks that are coming out of people that are entrusted with national security secrets and classified information are leaking it out.

Spicer stated the leaks are a “real concern” for Trump, as government officials could leak information about a variety of different classified decisions:

That’s a real concern for this president, that when he’s talking on the phone with a world leader, that when he’s making key decisions that are in the interest of protecting this country, that we have to wonder whether or not people who work for our government, who are entrusted with classified information and decisional based materials, are leaking that information out.

That, I do believe, is a big story that should be reported. I also believe that the president is rightly so very very concerned about this because it is not just something that is plaguing the current situation, but it goes back through the Obama administration, the Bush administration, the Clinton administration. When we have government employees who are entrusted with this and then leak it out, that undermines our national security, frankly.