Speaker Ryan on Racial Tensions: ‘Let’s Not Harden Ourselves Into Our Corners’ 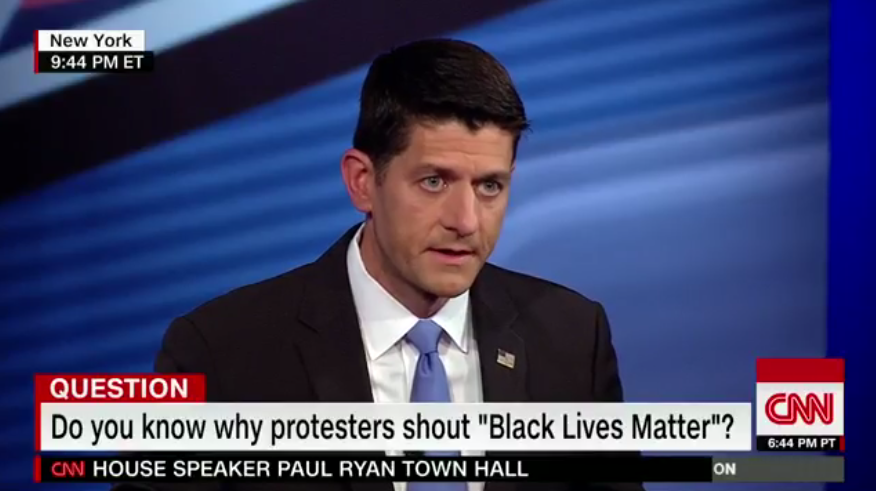 During CNN’s Town Hall event Tuesday night, House Speaker Paul Ryan discussed the tendency for people to close themselves off from those with different opinions.

Especially with regard to the controversies surrounding Black Lives Matter and the deadly Dallas shooting that left five cops killed and several people injured, Ryan argued that Americans need to "make sure that we can actually hear what people are saying" and come to understand why those differences in opinion exist.

“Let’s not harden ourselves into our corners so we stop listening to each other,” said Ryan. “Let’s make sure that we can actually hear what people are saying and understand what their problems are, and I also think we need to be respectful of each other’s different views.”

“And in this moment, when five cops were killed, let’s make sure we surround law enforcement with the support that they deserve,” said Ryan. “By the way, that means you can’t blame the shooting on ‘Black Lives Matter,’ and you can’t also blame the bad things that a couple cops do all of the cops."

He went on to caution against “painting people with a broad brush.”

“Let’s focus on paying respect to the people who are in charge of protecting our communities and then let’s use two ears, one mouth, and listen to the concerns that are out there,” said the House Speaker.

Watch a clip from his remarks below.

.@SpeakerRyan on Black Lives Matter: We need to be respectful of people's different views https://t.co/xeLZw6wN0e https://t.co/LdtyPiAPi4