Well, that escalated quickly. As is customary with President Trump, he has no problem tweeting out disapproval of things other countries are either doing or are suspected of doing. It looks as if the leader of the radical Economic Freedom Fighters (EFF) isn’t backing down from both Trump and doing what he believes is in the best interest of his country — taking land away from white South African farmers.

EFF leader Julius Malema had no problem pushing back against Trump’s tweet from last Wednesday where the president announced that he asked Secretary of State Mike Pompeo to “closely study” the situation in South Africa. Malema even going so far as to throw insults, calling Trump a “pathological liar.”

“We must put it on record, unequivocally, that Donald ‘the pathological liar’ Trump, we are not scared of you and your U.S.A. or Western imperialist forces,” Malema said during a press conference last Thursday.

The South African government put in place a “process of forcibly seizing white farmers’ property for redistribution to the country’s black natives,” as MRCTV’s Brittany Hughes reported one week ago.

“We want to send a strong message to the U.S.A. authorities,” Melema said. “Stay out of South Africa’s domestic affairs.”

Take a look at Malema’s comments towards the U.S. and “pathological liar” Trump:

Malema also intimated that his generation of South African politicians won’t “kneel” to the U.S. or any other “Western” country.

“We are not the generation that is going to kneel at the statue of Western imperialism and accept to live in the indignity of black landlessness,” Malema said.

Malema confirmed reports that the South African government is taking land away from "white people."

"Through land expropriation, we are forcing white people to share the land which was gained through a crime against the humanity of black and African people," Malema said.

It's pretty funny that Malema used the word "share" in describing the racial land grab government groups like his EFF are espousing. When you take someone's land without compensation, that's not sharing - that's theft. And besides, how can you force someone to share? It can be done, but doesn't forcing someone to do something kind of take the "share" aspect out of the whole equation? 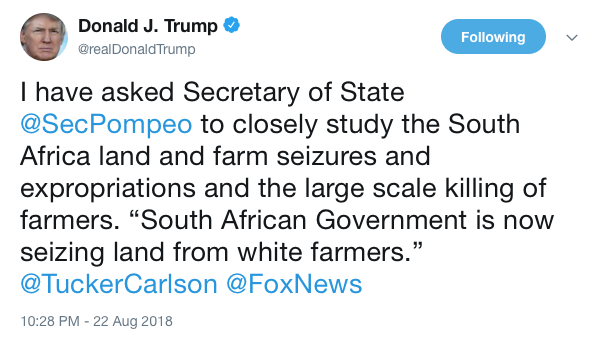 Racism seems to only work in one direction for Malema. In his own mind, his conscience is clear.