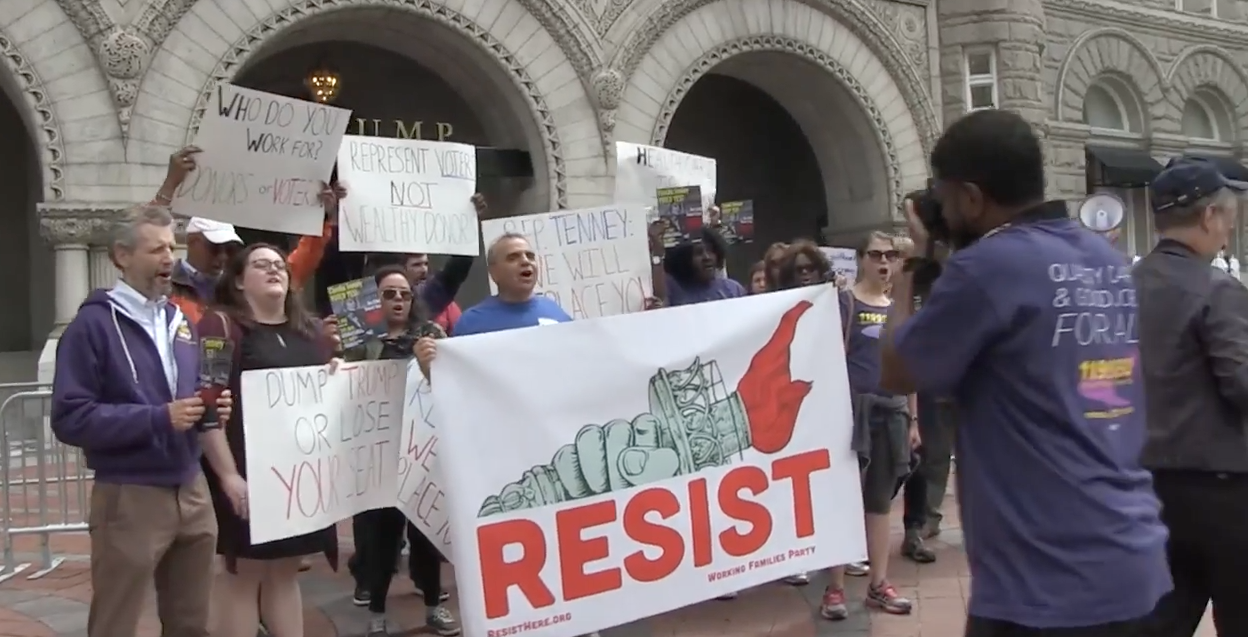 Is it just us, or are protests not what they used to be?

Even the social justice warriors who hate President Trump with all their might have been pulling back on their activism, as evidenced by a protest/PR stunt by a very powerful union Monday in Washington, D.C.

MRCTV’s Nick Kangadis showed up at Trump International Hotel to cover what was supposed to be a gathering of people protesting a GOP fundraiser hosted by Rep. Claudia Tenney (R-N.Y.).

This Monday, May 22nd, one of those members of Congress is spending their afternoon at a $500 a plate fundraiser at DC's Trump International Hotel. Rep Claudia Tenney (R-NY) is not only willing to gut healthcare access for her constituents, but also helping the Trump family line their pockets by hosting a fundraiser at a Trump hotel.

Rep. Tenney is hundreds of miles from her constituents, so we will support our brothers and sisters in New York by protesting outside her fundraiser. Join us and our allies to put Rep. Tenney on notice- standing with Trump will cost you your seat.

As shown above, these protesters have such a deep-seeded animus toward Trump that they will attack anyone that is remotely connected to the Trump administration.

But there were a couple problems with this particular event.

The first is simply that no one showed up. The second was that this protest was actually more of a public relations move by the Service Employees International Union (SEIU). It's not clear if the event's Facebook page intentionally didn't mention that this protest was an SEIU event intentionally so as to disguise a union event as something SJW-related, or if they simply didn't know what organization they work for.

Most of the “protesters” donned SEIU t-shirts, and at one point a vehicle completely adorned in SEIU colors and logos showed up and annoyingly honked the horn repeatedly to draw attention to the event.

The handful of people that actually showed up marched half a block and stopped directly in front of the hotel. They then proceeded to get into formation for a glorified photo opportunity.

What was not known until the end of the five-minute photo shoot was that a candidate for the Maryland House of Delegates was a part of the protest.

After candidate Ashanti Martinez got his picture taken with union members, he said a few words and the protest was over.

This protest lasted literally 20, maybe 30 minutes, and was nothing more than a ploy to get a political candidate’s name out into the ether.

Luckily, Kangadis caught up with Martinez and got his thoughts on the future of “Trumpcare” as well as the failings of Obamacare. Of course, Martinez didn’t speak ill at all about the Affordable Care Act, which is tanking.

“The purpose of today’s event is to let people know, let the Trump White House know, that healthcare is a right and not a privilege,” Martinez said.

When confronted with the fact that healthcare is not a right, according to the law and the Bill of rights, Martinez brought up how every other country has a better healthcare system than the U.S. and how they provide healthcare for every person in those countries.