Six HUGE Reasons to Have a Healthy Dislike of Dan Savage

In (dis)honor of Disney ABC giving anti-Christian bigot, wanna-be activist Dan Savage a big, warm bear hug, MRCTV would like to chronicle six of the most outrageously disgusting quotes that the little hate-monger has dared to utter.

WARNING: Be prepared for the sickening use of profanity and very characteristic lewdness.

In order starting from the most recent:

On the 4th of March 2015, Dan Savage tweeted in response to Dr. Ben Carson's assertion that homosexuality is choice. Savage responded in a way that only a bigot lacking common morals could. 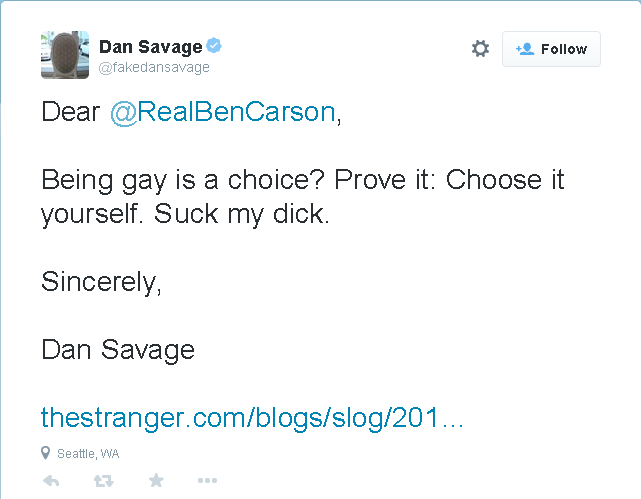 His argument isn’t nearly as strong as he seems to think it is. He clearly has symptoms of paramnesia when it comes to the definition of the word “choice.” Isn’t choosing to NOT do such a thing a very obvious and valid choice? It isn’t that hard, Danny boy.

On Feb. 28 of this year, Savage was true to his name as did his absolute worst (which ends up looking like a middle school class clown gasping for attention) to try and insult the Catholic Church, again. In accordance with his repeatedly child-like antics, he tries to attribute child molestation to a statue of a former pope that was undergoing repair, tweeting: 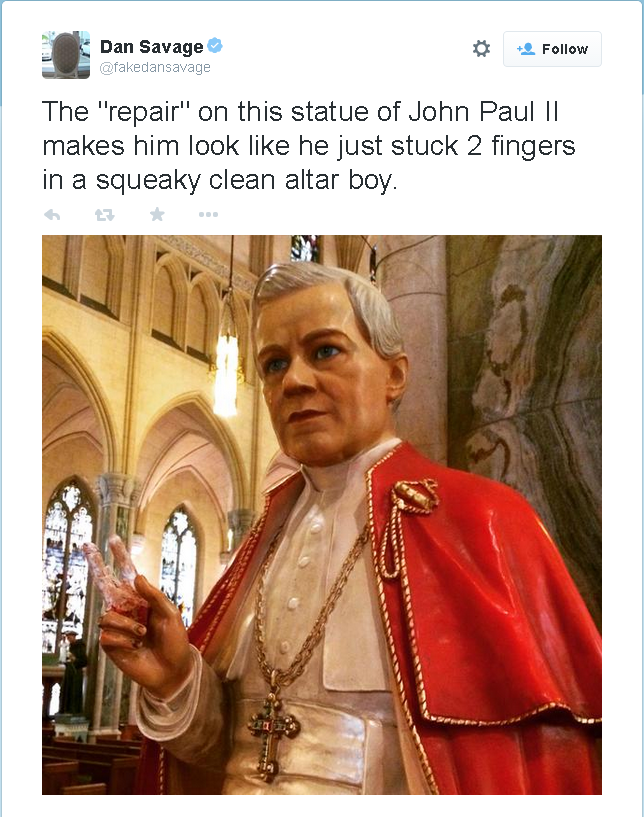 Fun fact: That is actually a statue of Pope Pius X. He can’t be bothered to do a little research before he verbally flails his arms through the air, trying so desperately to punch at the shins of real men of integrity.

In an appearance on an episode of “Real Time with Bill Maher” on November 21st of 2013, Savage proved himself to be very narrow-minded (in both his viewpoints and the scope of his arguments) as he continues to hold a death-grip on the child abuse charges against an extremely small number of Catholic clergymen.

He vilifies Bishop Larry Silva for his comments regarding the effects of same-sex marriage on children, and then offers an off-handed compliment to Pope Francis. How angry do you think Savage was when Pope Francis went to the Philippines and, during mass, spoke of the threat same-sex marriage had on the tried and true traditional family?

November 4th of 2013, Dan Savage was, of course, invited onto a panel at an event called “The Festival of Dangerous Ideas.”

He probably fired his publicists when they told him that being involved with this event was a dangerous idea for his already decrepit image. Would he argue that he didn’t choose to have dangerous ideas because they’re just an immutable part of his identity?

This identity of his was asked to give a “truly dangerous” idea that he thought could change the world for the better. His answer?

Mandatory abortions. For the next thirty years.

Listen to the psychotic audience applaud when he says it:

Savage tried to defend himself, saying that it was only a joke that was obviously meant to offend.

Could you imagine the collective shudder of the leftists when they heard this? Ouch, right in the credibility.

Savage again crossed the line in October of 2012 when he accused Tony Perkins, President of the Family Research Council, of celebrating the suicide induced deaths of gay teens. He held a presentation at the Winona State University where he told the students there that Perkins “sits on a pile of dead gay kids every day when he goes to work."

See it all here:

He was utterly unapologetic, tweeting:

What will happen if Christian teens start committing suicide because of pressures by an all too liberal society that tells them that their beliefs instantly marks them as hate-filled bigots who serve only to delay “inevitable” progress? Will this so-called anti-bullying activist have the integrity to defend the lives of bullied Christians?

Lastly, On April 13 2012, Dan Savage was invited to be a keynote speaker at a high school journalism convention in Seattle. He was expected to speak on the topic of bullying but he instead used the platform to attempt to influence the youth with his personal ideology. In fact, he was so forceful in his unabashed bashing of the bible, brave teens stood up to him. They walked out on his extreme-left garbage-talking. Savage, being the cretin that he is, called those kids “pansy-assed” and tried to play it cool saying that “It’s funny as someone who is on the receiving end of beatings that are justified by the Bible how pansy-assed people react when you push back.”

Watch what you can stand in a video of that very speech below:

Isn’t it funny that this man who describes himself as an anti-bullying activist turns out to be one of the largest bullies to have ever been given such a widely-spread voice? Is this really the kind of man that Disney ABC wants to endorse? Are they truly so complicit that they become another tool of liberal indoctrination?