Michael Bell is a professor of "Community and Environmental Sociology" at the University of Wisconsin-Madison. His Departmental Areas of Interests include: Gender, Rural Sociality, Race and Ethnic Sociology, Political Sociology, among many others.

For starters, Professor Bell is a complete contradiction to the claims he preaches throughout his paper "The Problem of the Original Capitalist" In the paper, he states:

"Plus Marx argued that capitalists will generally want to accumulate more and more for themselves, increasing production through mechanization and other means, thus undermining the price of their own goods through over-abundance, in turn leading to falling rates of profit, expansionary pressures, and continual crises in capital accumulation"

But, isn't Mr. Anti-Capitalist Prof. Bell also trying to "accumulate more and more" for himself when he assigns his own textbook as a requirement for his "Environmental Sociology" class to pad his six-figure salary? The book, "An Invitation to Environmental Sociology" is available here on Amazon, with new copies priced at $85.26.

In the Syllabus for his "Environmental Sociology" class, Professor Bell tries to justify requirement for students to buy his own book:

In the same syllabus as linked above, he notes that students are taught "The Treadmill of Production and Eco-Marxism" in week 5 of the semester. 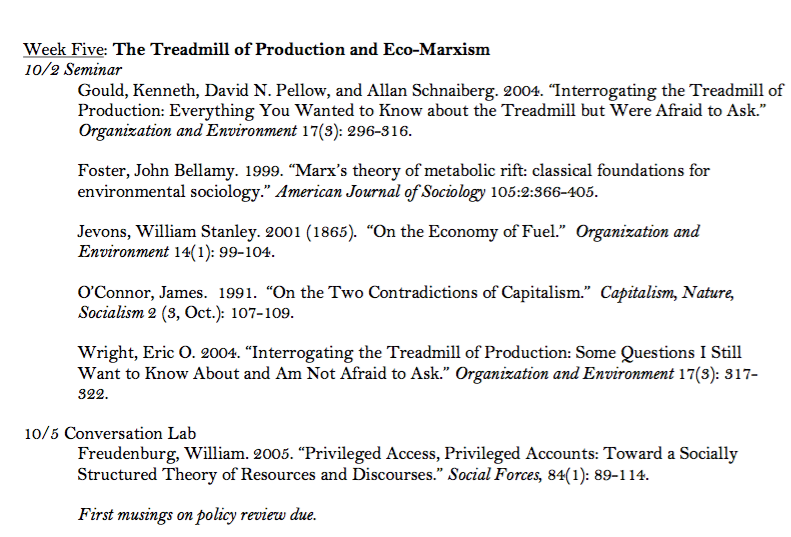 Professor Bell undoubtedly has a bias towards Karl Marx and his teachings which certainly influences the atmosphere in which these beliefs are taught in his classroom. Professor Bell even states in the opening passage of his "The Problem of the Original Capitalist" that he has been re-reading Marx and praises him for being "so smart."

Professor Bell also notes in his syllabus that a student's "thereness" accounts for 33% of that student's total grade.

According to records in the 2014-2015 UW Redbook, Professor Bell took in a staggering $115,890 for his tenured position in the Department of Sociology at the University of Wisconsin-Madison.