Update (9:27 am, 2/15/18): The Miami Herald is reporting that the number of casualties remains at 17 dead, while the number of wounded has been updated to 15 people.

Also, according to Yahoo! News:

Twelve of the victims were found inside the school; two were located just outside and one on a street in Pine Island. Two others died at the hospital. Israel said that at least a dozen others were injured and transported to local hospitals, and that some are currently in surgery.

The suspected shooter, a former student identified by as 19-year-old Nikolaus Cruz, was taken into custody in nearby Coral Springs. Israel refused to speculate on a motive.

Update (4:23 pm, 2/14/18): According to WSVN 7 - Miami, Broward County Schools Superintendent Robert Runcie told media that there have been "numerous" fatalities: 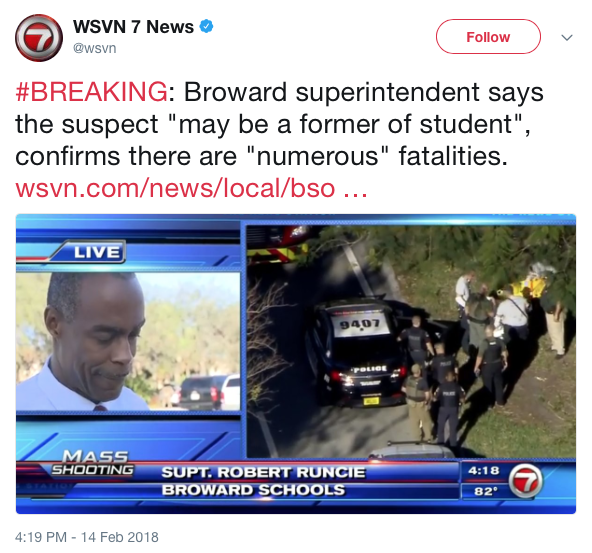 Update (4:03 pm, 2/14/18): WSVN 7 - Miami has now provided visual confirmation that police have the person of interest in custody: 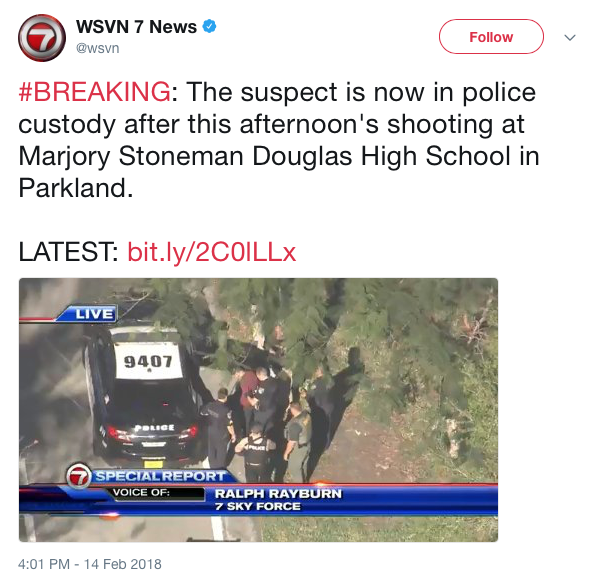 Update (3:53 pm, 2/14/18): According to televised reports from both WSVN 7 - Miami and Fox News are reporting that the "person of interest" is now in custody.

Also, President Trump just tweeted his condolences along with other remarks concerning the situation:

Update (3:44 pm, 2/14/18): The Miami Herald is now reporting that Margate Fire Chief Dan Booker told the Herald that at least one student has been killed as a result of the shooting.

Fla. Governor Rick Scott sent out a tweet saying that he just spoke with President Trump about the situation: 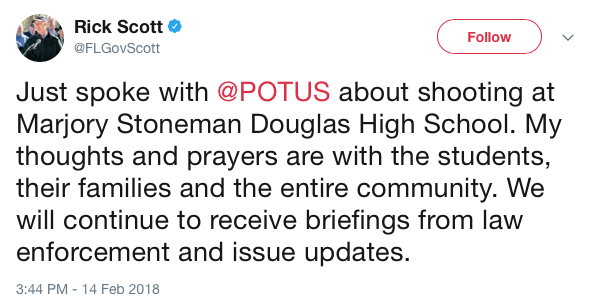 Update (3:18 pm, 2/14/18): According to WSVN 7 - Miami, Margate Fire Rescue has classified the situation as a level three "mass casualty incident, which means at least 20 people have been injured."

The Broward County Sheriff's also sent out this tweet: 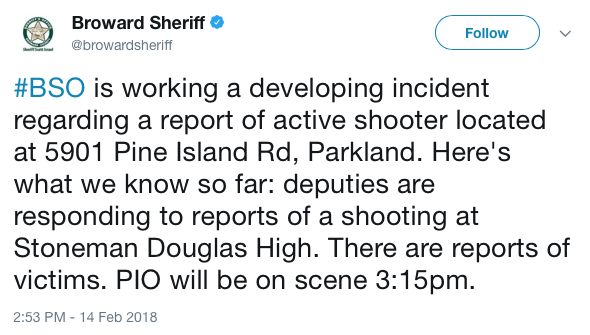 Original Story: There are reports of a shooting at or near Marjory Stoneman Douglas High School in Parkland, Fla. Wednesday afternoon. There are few details so far as to the nature and scope of the shooting.

According to WSVN 7 - Miami:

The Broward Sheriff’s Office has yet to confirm details. Only that there was a shooting at the school.

One person was seen being wheeled into a Coral Springs Fire Rescue ambulance, but he was on his phone.

At least three other people were seen surrounded by fire rescuers, at the corner of the intersection.

Several students could be seen walking and running along the road, past those injured.

The Coral Springs Police Department sent out a series of tweets about the incident: 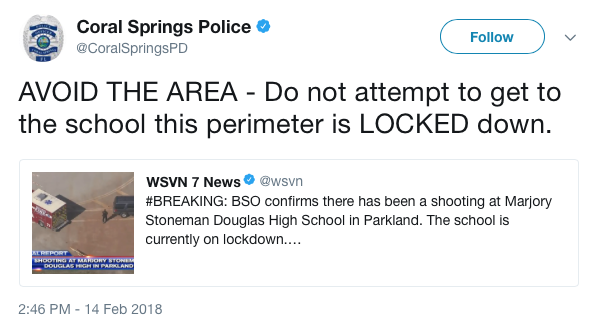 Stay tuned to MRCTV as more details of the incident come in.