The Shocking Truth of How the Feds are Militarizing Domestic Agencies 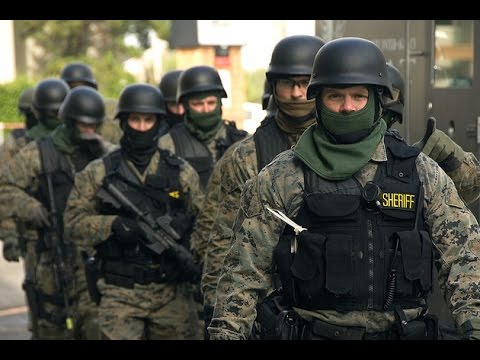 For nearly ten years, watchdogs have issued reports about the alarming and unprecedented weapons and ammunition purchases made by domestic federal agencies, as well as the unconstitutional sales of military grade weapons and vehicles from the feds to local and state police.

And, for just about as long, skeptics have derided those reporters, not bothering to check the facts or consider the reality that these gun-spreading activities have been conducted by a federal government intent on punishing civilians for owning or trying to buy personal weapons.

Now, thanks to an overview from OpenTheBooks and a new piece by Kellan Howell for Circa News, we have a “Big Picture” of just how massive the domestic US agency military buildup has been:

And who has been receiving these “guns and ammunition," as The Clash once said?

According to Howell, bureaucrats in the Food and Drug Administration and the tough guys in the Environmental Protection Agency got some, and OpenTheBooks reports that the federal prison system got $1.4 million in what is listed as “military chemical weapons”.

Admittedly, OpenTheBooks notes that some of these domestic agencies might be careless with their categories on the “purchase and receive” ledgers, but here are some other facts the organization brought up in their new report called “The Militarization of America”:

But, these are merely drops in the proverbial police-state bucket, and should be seen as nods to the hard work of people like Paul Joseph Watson and his colleagues at InfoWars -- some of the first to look into federal procurement contracts to find the stunning information about ammo and weapons purchases for domestic US agencies. For example, in August of 2012, Watson revealed that the feds were “putting out a solicitation for 46,000 rounds of hollow point bullets” - for the National Oceanographic and Atmospheric Administration.

In 2013, InfoWars reporter Kit Daniels discovered that the US Army was buying millions of rounds of ammunition popular with civilians, but of very little use to the US military. The reason? None offered, except merely to store the ammo. As Daniels wrote, the feds decided to take, “2,550,000 rounds of 7.62x39mm ball ammo, 575,000 blank rounds of 7.62x39mm ammo and 425,000 rounds of 9x18mm Makarov ball ammo” off the market, raising the price for all those forms.

Indeed, while the federal government is increasing the militarization of domestic bureaucrats and breaching the time-honored Posse Comitatus Act (an 1878 code prohibiting use of US soldiers to enforce laws on US soil unless during war or at the request of states’ governors), it appears to have set about an agenda of increasing the costs of ammunition for civilians.

Those who would use armed government agents to punish peaceful civilians for owning firearms not only seem to have no problem with the president arming domestic social agencies and foreign criminals through programs such as “Fast and Furious,” they seem eager to increase the costs of rounds so as to make it harder to load firearms that people might legally own.

In fact, in 2009, the US military began curtailing its resale and recycling of used rounds and brass, and in 2014, InfoWars’ Kit Daniels also found that California politicians succeeded in passing a ban on traditional lead ammunition, which, as he noted, would triple the cost of rounds.

Then there is the military manna that local police forces have received from the feds in the past ten years, ranging from hundreds of thousands of rounds to silencers, armored vehicles, and drones.

Anyone who has passed even the smallest amount of time time putting together the simplest of kids’ puzzles can see the pattern: increase costs and penalties for firearm ownership while increasing the armaments that federal domestic agencies and local police possess. Not only does this create de facto gun limitations on purchases based on price, but it also makes more and more local law enforcement agencies and governments reliant on federal handouts.

In colonial America, the British forces marched on Lexington and Concord, Massachusetts because they had become suspicious that the colonists were stockpiling arms and ammunition. While retaining one’s sentimental affiliation with the rebels, perhaps he or she can consider that the Brits were well founded in their suspicions.

Sometimes, it’s easy to see when a group or organization is arming itself to the teeth, and in this case, it’s not the rebels.