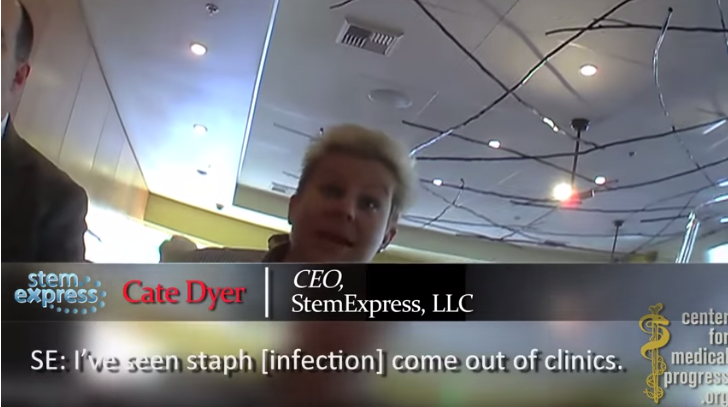 After releasing a teaser video on Friday, Monday saw the Center For Medical Progress publishing the full video of a dinner conversation between undercover agents posing as fetal tissue buyers and StemExpress CEO Cate Dyer. This latest video detailing how Planned Parenthood and its partners like StemExpress illegally sell body parts of aborted babies, continues to show the cavalier way babies are killed, torn apart, and sold for profit - but, adds a new wrinkle which should serve as a warning to women going into a clinic for and abortion: unsanitary conditions.

At one point during the dinner conversation the StemExpress CEO shares a few laughs over the unsanitary conditions at some of the abortion clinics:

Dyer:  I’ve seen really rampant, rampant problems with bacteria in certain clinics. [laughter] Some where you’re kind of in question of should they really, you know, [laughing]
Buyer: Right.
Dyer: I’ve seen staph come out of clinics.
Buyer: Wow.
Dyer: So, I mean, I’ve seen all sorts of things come out of clinics, so.

Interestingly, when comparing Planned Parenthood to other abortion clinics providing her company baby parts Dyer, used the same language as one would use for "big box" retailers:

I don’t think that one has more pro’s or con’s than the other. I mean, Planned Parenthood has volume, because they are a volume institution.

But, of course, if you ask Planned Parenthood, abortions only represent 3% of their business - a tiny percentage for a "volume" baby parts business.

In this video, as with many of the previous videos, there is an indication that doctors need to change the way they do the abortion procedure so the baby can be "harvested." Dyer complains, “So many physicians are like, 'Oh I can totally procure tissue,’ and they can’t” (Federal law requires that no alteration in the timing or method of abortion be done for the purposes of fetal tissue collection).

When the "Buyer" wonders if StemExpress can meet the additional needs of this new client for fetal livers, Ms. Dyer assures the buyer that StemExpress can't get enough in the pipeline to sate demand for another decade:

Buyer: What would make your lab happy? What would make your lab happy?
Dyer: Another fifty livers a week.
Buyer: Ok, so you can handle that?
Dyer: Yea. Just so you guys know, on the collection side for us, we’re also- as you see Megan out there in the clinic, we’re working with almost triple digit number clinics. So, it’s a lot on volume a little more than what we do. It’s a lot. So, I don’t think you’ll hit a capacity with us anytime in the next ten years. I think you’ll feel solid with that standpoint. So, I think, with that you’ll feel like doing an agreement with us. It will be consistent growth and our growth has been consistent, and it’s going to continue to grow from that standpoint.

Keeping the dinner conversation "light," Dyer explained that some labs don't want to be reminded that they are buying the body parts of dead babies.  She laughs at the fact that the labs might not like to be reminded of what they are working with, "But we know what it is. I mean, [laughter], but their lab."

As you watch the video below, notice the clinical way Cate Dyer talks about the aborted babies.  Each one is called a "case" as not to acknowledge that the "clump of cells" they are dissecting is actually a recently killed baby.