Arizona Republican Senator, war hero, and father John McCain has died at age 81 after a hard-fought battle with brain cancer.

He died just one day after his family announced that he would not be seeking further treatment.

McCain died at his home at 4:28 p.m. local time, according to a statement from his office.

He lived a life of service – from his service as a naval aviator during the Vietnam War and being taken as a POW for more than five-and-a-half years to his service as senator to Arizona for over 30 years. He was a two-time Republican presidential contender, first in 2000 and then 2008 where he lost against then-Democratic presidential nominee Barack Obama.

News of his death has sent shockwaves throughout the country.

His daughter Meghan McCain tweeted a heart-breaking statement calling her father a “warrior” who is “rising to meet the Author of All Things.”

“He taught me how to live,” she wrote. 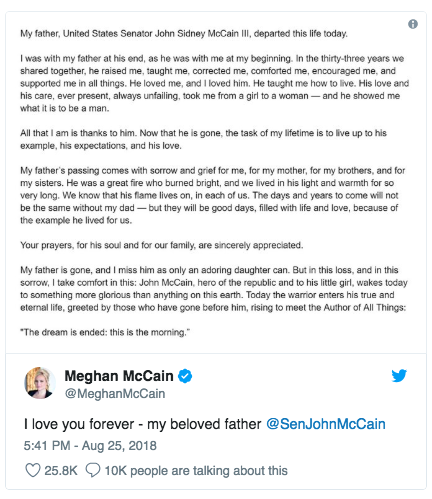 His wife Cindy McCain wrote that her husband “passed the way he lived, on his own terms, surrounded by the people he loved, in the the place he loved best.”

South Carolina Republican Senator Lindsey Graham tweeted that “America and Freedom have lost one of her greatest champions….And I’ve lost one of my dearest friends and mentor.” 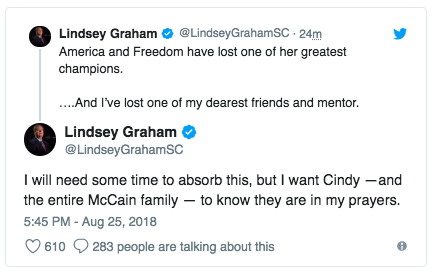 Former Democratic U.S. senator to California Barbara Boxer tweeted that she “will always treasure the times we worked together and even the times where we disagreed and duked it out.”

“His voice will be sorely missed in this time when his courage is so needed,” she said. 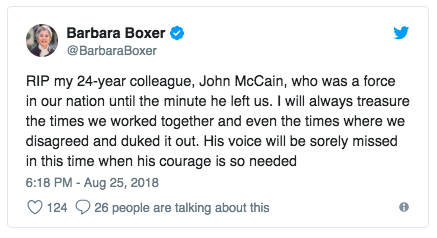 Former Republican Governor of Alabama Mike Huckabee wrote that even though he lost the 2008 Republican presidential nomination to McCain, "we never once had a cross word."

"After he beat me I campaigned vigorously for him. No regrets. My heart goes out to His family," tweeted Huckabee. 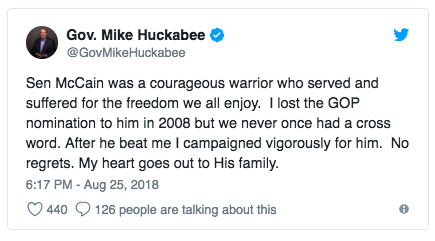 President Trump, who often came to blows with McCain, tweeted his “deepest sympathies and respect” to his family.

He has been praised for being gracious to friend and foe, for venturing across the aisle, and for putting country over party.

Whether people agreed with McCain's political views or decisions, it is undisputed that the man was a patriot and fought for what he thought was in the best interest of America.

John McCain’s life was like something out of a Hollywood movie script — he was a naval officer and a jet pilot, a war hero and politician. He died today at 81 pic.twitter.com/pdln1hAMyQ