Senate Dems Were Singing a Different SCOTUS Nomination Tune in 2010

“One of these things is not like the other…”

Sure, that might be a line from a classic “Sesame Street” song, but it’s certainly applicable to describe the hypocrisy of Democratic senatorial comments concerning Supreme Court nominations. What a difference a president makes!

Even though it’s not surprising that politicians talk out of both sides of their mouths, it’s still noteworthy to point out the incredible double-standard they take to approach different situations.

Senate Democrats have predictably come out in opposition to any confirmation hearing of any SCOTUS nominee that President Trump puts up in the wake of Justice Anthony Kennedy announcing his retirement on Wednesday. The Dems claim that it would be inappropriate to confirm any nominee so close to the mid-term elections. But, they were singing a different tune in 2010 when then-President Barack Obama nominated then-Solicitor General Elena Kagan for a SCOTUS seat.

Let’s take a before-and-after look at what some Democrats said in 2010 and what they’re saying now.

2010 - Elena Kagan is the kind of moderate, experienced legal leader who can and should receive bipartisan support in the Senate. The fact that she has so much practical experience, on a Court where it is missing, should be considered an asset. She has a long record as a consensus builder, and is the kind of person who can bridge the 5-4 splits that have become so routine on this Court. There is no reason why her confirmation should not be completed before the August recess. 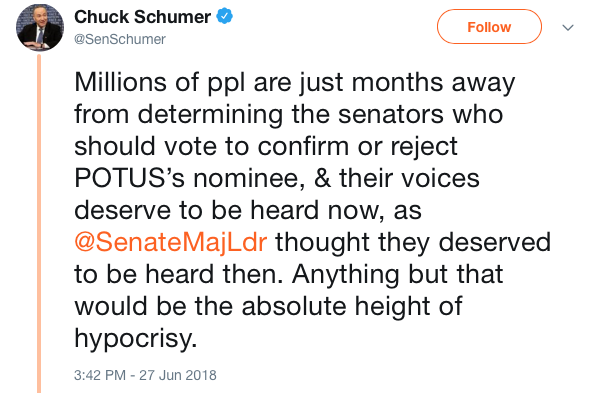 2010 - I am also very pleased that the President announced his nomination of Solicitor General Kagan in early May.  Chief Justice Roberts and Justice Sotomayor were both confirmed in 72 days – that timeline would allow us to consider the nomination on the floor the third week of July.  It’s pretty clear to me that this nomination needs to be considered by the Senate in a timely manner because we will need to move on to considering other critical matters like the ratification of the START Treaty, the annual appropriations bills, a new jobs package, food safety, and other pending legislative priorities.

2018 - There should be no consideration of a Supreme Court nominee until the American people have a chance to weigh in.

2010 - Solicitor General Kagan has a reputation for great intellect, legal expertise, and an ability to bridge ideological divides. And, if confirmed, Ms. Kagan, a trailblazer throughout her career, would be the third woman on the current Court -- a historic high. I look forward to reviewing her record and participating in her confirmation hearing later this year.

2018 - On the heels of another Supreme Court term defined by a Republican 5-4 majority delivering big wins for right-wing and corporate interests, Justice Kennedy’s retirement should be a wake-up call to anyone who cares about equality and justice for all.  With decisions like we’ve seen this week, the American people ought to be on high alert to this troubling pattern.  I’ll do everything in my power to keep President Trump, Senator McConnell, and their dark-money backers from installing another nominee predetermined to assist the wealthy and powerful.

Well, what do we have here? To be perfectly honest, SCOTUS nominations and appointments shouldn’t be based on partisan politics. Instead, the people that should be nominated are those that most faithfully stick to upholding the Constitution and the laws that we have on the books. That’s all.

However, we all know that’s not how it ever works. SCOTUS shouldn’t be looked at like a map of which political parties or ideologies are represented in Congress. Maybe it’s just me, but shouldn’t judges be impartial?

Whatever the case, these hypocritical examples are just more proof that politicians serve no one but themselves and their own interests.