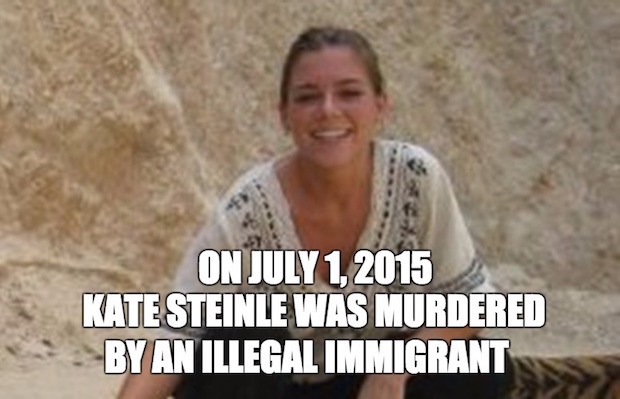 Two Senate bills designed to protect American citizens from illegal immigrants died on the Senate floor Wednesday afternoon, Kate's law and a bill to defund cities that grant sanctuary to illegal immigrants. Each of the bills garnered support from a majority of senators - but not the 60 votes necessary to avoid a filibuster.

One of the two bills was Kate's Law, which would have strengthened the sentences for people who are caught entering the country illegally two or more times.

Introduced by Senator Ted Cruz (R-TX), the legislation is named after Kate Steinle, the 32-year-old woman who was killed in July 2015 by an illegal alien who had several felony convictions and had been deported from the United States five times. Ms. Steinle was shot to death while she was walking along the San Francisco pier with her dad.

The final vote on Kate's law was 55-42, five less than needed for cloture.

After the vote, Senator Cruz remarked:

It is disappointing to see Democratic leaders stand with convicted felons rather than the American people.  Once again, many Democrats have politicized an issue that shouldn't be a red state/blue state issue. Americans are tired of politicians standing with violent criminal illegal aliens. This should bring us together. We should protect the American people.

The second bill, the Stop Dangerous Sanctuary Cities Act, was introduced by Senator Pat Toomey (R-PA). The sanctuary city bill also has ties to Kate Steinle. Four months before Ms. Steinle was murdered, her accused killer Juan Lopez-Sanchez, was in federal prison for re-entering the country after his fifth deportation. As his deportation neared, the federal prison officials transferred him to the San Francisco sheriffm who had an outstanding warrant on him for an old marijuana possession violation.

The Stop Dangerous Sanctuary Cities Act would have blocked federal funding for local governments that restrict their law enforcement officers from cooperating with immigration officials. At the same time, the bill would have absolved the local governments who allow their police to cooperate from legal liability, but would have allowed people wrongfully detained to seek compensation from the federal Department of Homeland Security.

Toomey's bill fell seven votes short of the 60 votes needed to cut off debate, 53-44. After the vote, the Pennsylvania Republican said,

Despite the support of a bipartisan majority, the Senate has once again failed to act on a critical public safety issue. Sanctuary cities are Orwellian in their logic -- they give extra protection to dangerous criminals, just because they happen to be in the country illegally. This is a dangerous injustice that must be stopped, and I will continue to fight it.

Minority Leader Harry Reid (D-NV) led the opposition to the bills, claiming that putting repeat violators of immigration law into prison would end up overcrowding prisons and cost Americans billions of dollars. But, it seemed his real objection was based on presidential politics:

Republicans are legislating Donald Trump’s vision that immigrants and Latinos are criminals and threats to the public.

To some, it may be ironic that the same political party which staged a sit-in on the House floor because they think they can to save lives by taking away gun rights of Americans won’t allow a vote on two bills designed to strengthen enforcement of laws and protect the lives of American citizens from criminal acts by people who have trespassed their way into the country.