Sometimes, liberty-minded individuals raise their hands in consternation and proclaim, “I’ve had enough”. The assaults to freedom, and the twisted, belly-crawling, shameless excuses politicians inflict on us are just too frequent, the insults infinitely debased and insulting.

Our self-serving pal, Chris Murphy, a Democrat Senator from Connecticut, has provided us with yet another of those “supernova-of-insults”.

He seems to have a real affinity for this kind of thing.

On May 19, less than a day after a seventeen-year-old allegedly used pipe bombs, a pressure cooker bomb, a shotgun, and a .38 revolver to attack fellow students and teachers at Santa Fe High School, in Texas, leaving ten dead and at least ten injured, Senator Murphy let his knee jerk him into action, prompting him to spit in our faces and call it rain.

Which is quite rich coming from a man who, like many leftists today, believe the words of Constitution should be “interpreted” according to “modern meanings”, not their original intent, and that the amendment process is essentially irrelevant. Who, exactly, is imagining things, Mr. Murphy? Some of us are insatiably curious to hear your answer…

But Murphy isn’t done yet. He has plenty of saliva left, and he’s eager to keep spitting.

"And the real #2A isn’t absolute. It allows Congress to wake up to reality and ban these assault rifles that are designed for one purpose only - to kill as many people as fast as possible." 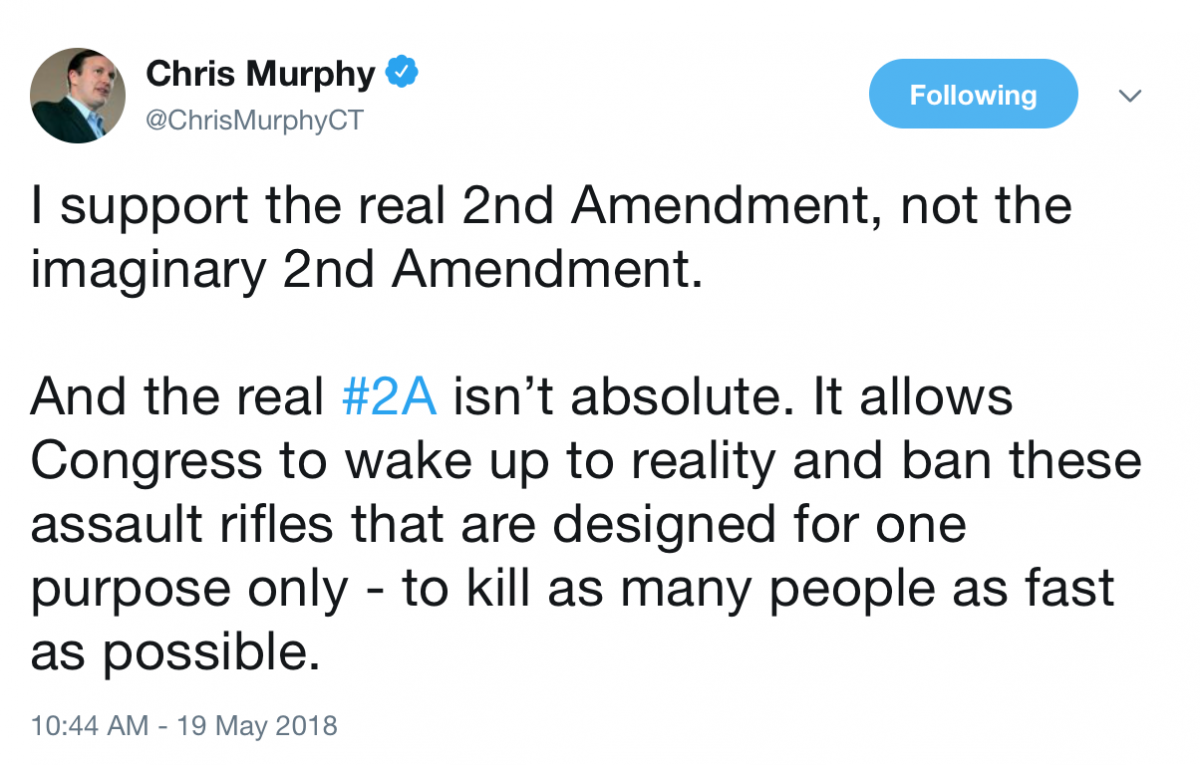 On the darkly ironic side, not only is Murphy’s embarrassingly ignorant, self-righteous, and fictive post wrong about the meaning of the Second Amendment, the alleged attack in Santa Fe High (which seems to have prompted his nervous screeching fit) was not even conducted with what he labels an “assault rifle”.

One of the weapons was what his pal, Tough Guy Joe Biden, told people to get to defend their homes: a shotgun.

The alleged attacker also allegedly stole his father’s shotgun and .38 revolver. According to the law, he couldn’t do that.

The alleged attacker is seventeen. According to the “law”, he couldn’t possess those guns.

How strange that people possessing criminal intent are willing to break statutes to possess guns… It’s almost as if they don’t care about the statutes. Perhaps Mr. Murphy can come up with another colorful and fanciful way to look at this manifest, empirically recognizable reality, which he seems disinclined to call reality in any way.

Kind of like his “reality” when it comes to the Second Amendment.

As I have noted before at MRCTV, not only is the Second Amendment explicit -- its language being clear and emphatically strict, commanding “… the right to keep and bear arms shall not be infringed” -- the term “rights” has a very explicit meaning as well.

It is derived from Old English and Old German, based on “right-handedness”, and tied to what was seen in medieval times as the proper way to treat one’s neighbor. For centuries, the “right hand” was “proper” or “correct”, and the left hand was seen as improper, unnatural, and abnormal, hence the word “right” came to be tied to what was “proper” in the treatment of others. Be the concept attached to a God-given right, as Aquinas and Locke might have explained, or we can come to the conclusion via non-religious observations of human interactions, as Emmanuel Kant did when writing about “deontology” and “universalizability”, we, as individuals, recognize our own rights and those of our neighbors, and we offer reciprocal respect for those rights.

They are untouchable. That’s why they are called rights. According to the Lockean philosophy that undergirds the US Constitution, the government is supposed to “protect” those rights, and the Second Amendment was written to add extra insurance that political blowhards like Murphy wouldn’t infringe on our rights, wouldn’t become predators through rhetorical and statutory means, attacking us and insulting our intelligence along the way.

Have no doubts. Murphy is a predatory force. This is the same man who, along with RINO Senator Robert Portman, of Ohio, co-sponsored the noxious “Portman-Murphy Countering Disinformation and Propaganda Act of 2016”, which charged federal agencies with labeling websites, blogs, videos, or any other speech supposedly protected by the First Amendment as “propaganda” and gave the feds $150 million to hand to dying dinosaur media outlets that “work with the federal government” to combat said propaganda.

Websites like RonPaul.com and AntiWar.com; real foreign propaganda there.

It sure is a good thing Mr. Murphy has such a firm grasp on the document he swore an oath to protect and defend. If I weren’t enlightened by his genius, I might think he were making it up according to his own imagination.

Many will long remember the precise, pointed words of the Declaration of Independence, particularly the observation that men are created with unalienable rights, and the notation that  “…when a long train of abuses and usurpations, pursuing invariably the same object evinces a design to reduce them under absolute despotism, it is their right, it is their duty, to throw off such government…”

Does anyone observing the machinations and operations of Murphy, his accomplices in the contemporary federal government, and many state and local politicians, honestly believe the Declaration threshold has not been reached?

You are not a tool to be used according to their elitist and brilliantine whims. And they are not gods to rule you.

But Mr. Murphy and his pals don't seem to get it. They’ll even claim they have a better hold on reality than you, as they make pretend, and make up the rules they supposedly swore an oath to uphold.