On Sunday, CNN’s Jake Tapper interviewed Senate Judiciary Committee member Mazie Hirono (D-HI) concerning the allegations against Judge Brett Kavanaugh. Tapper asked the Hawaii senator if Kavanaugh should “have the same presumption of innocence as anyone else in America?” She all but said, "No."

Instead of directly answering the question, Hirono beat around the bush with her choice of confusing words, saying, “I put his denial in the context of everything that I know about him in terms of how he approaches his cases.”

Huh??? What in the world does that mean? You ever hear someone say something seemingly so “deep” that you couldn’t quite understand them so you wondered if your brain wasn’t the sharpest knife in the drawer? That is just what happened here and this Billy Madison clip summarizing this, maybe perfectly.

The Senator’s dodgy answer to the CNN host’s question suggested that she does not believe Kavanaugh should have the presumption of innocence until proven guilty, as every other American citizen has -- or should have.

People on Twitter made their thoughts clear, expressing both disagreement and agreement with Hirono's statement: 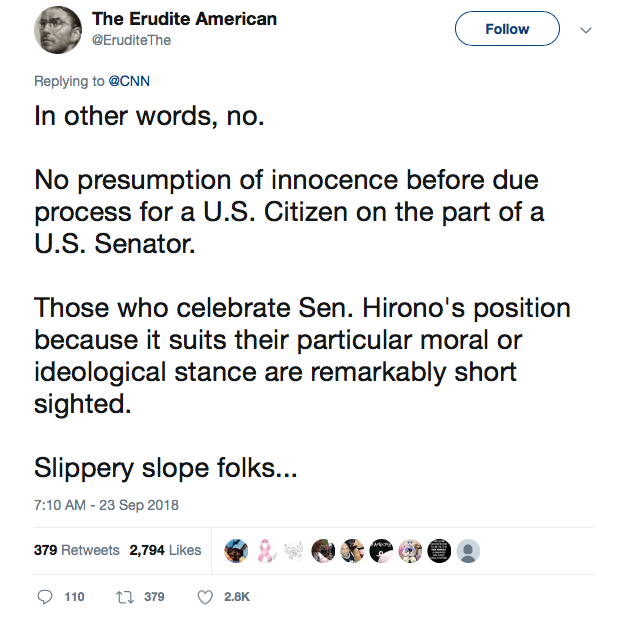 Today on MSNBC, Hirono was asked to clarify her statement made to Tapper. She explained, “Look, we’re not in a court of law, we’re actually in a court of credibility at this point.”

So because of his positions on cases in the past, he's not credible to testify against an assault to his character?

When you boil it down to the very bottom, it appears as though Hirono’s support of the allegations against Kavanaugh are not because she believes them, but because Kavanaugh is not aligned with leftists' ideologies or agenda. Tapper seemed to have a clue of this when he asked, “It sounds to me like you’re saying because you don’t trust him on policy, and because you don’t believe him when he says for instance that he does not have an opinion on Roe v. Wade. You don’t believe him about this allegation, about what happened in 1982? Is that fair?”

Hirono responded by saying, “This is why it is so important that there be at least an investigation so that there’s some effort at collaboration.”

It really can’t help but seem that these allegations and the Democrats' continued support of them are not because they care about Christine Blasey Ford or the new accuser, but because they want to keep Kavanaugh out of the Supreme Court for fear of him taking abortion (under their guise of “women’s rights”) away from them.