Sen. Bob Menendez: 'Americans Deserve to Know' if Trump's 'An Agent of the Russian Federation'

Did you know that President Trump could maybe, possibly, in a way, if you carry the one “an agent of the Russian Federation?” Well, that’s what Sen. Bob Menendez (D-N.J.) is posing as a possible truth.

Notice how Menendez said “wittingly or unwittingly.” This gives the politicians and the media who have participated in this conspiracy theory, which is what pretty much anything like this should be considered until facts dictate the truth, ammunition to say that Trump may have been aiding Russia without even knowing. That also gives the people who desperately want Trump out of office a pretty wide berth to attempt to take down a sitting president.

Is President Trump an asset of the Russian government? https://t.co/Th8LrijUbg 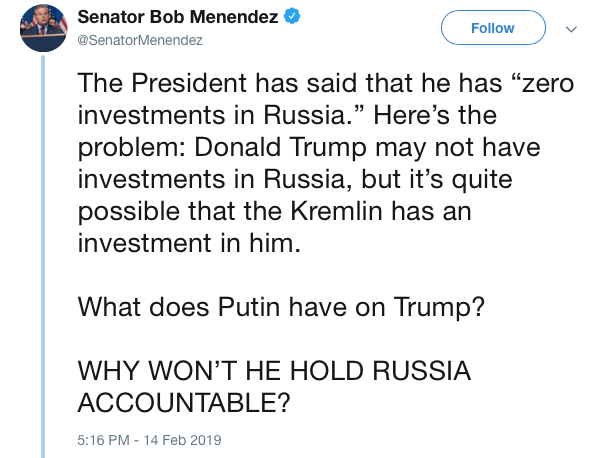 Here’s another Menendez’s tweet with a list of reasons of why Trump could possibly be “an agent of the Russian Federation: 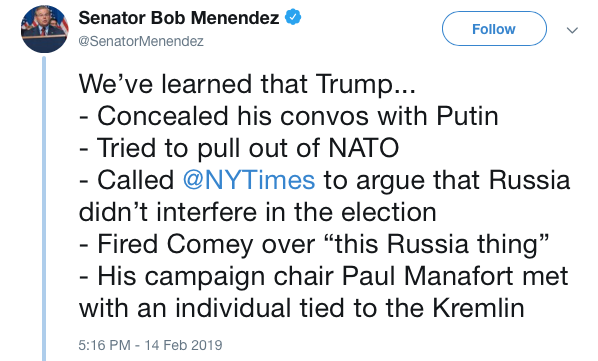 I guess Menendez, as well as the media, had no interest in an NBC article from Tuesday that reported that the Senate Intelligence Committee have “uncovered no direct evidence of a conspiracy between the Trump campaign and Russia, according to both Democrats and Republicans on the committee.”

“There is no factual evidence of collusion between the Trump campaign and Russia,” Senate Intelligence Committee Chairman Sen. Richard Burr (R-N.C.) said Tuesday.

Who knows exactly how long this seemingly never-ending investigation will continue? What we do know is that politicians seem to be divided between presenting theories as to what something could mean and actual investigative data.