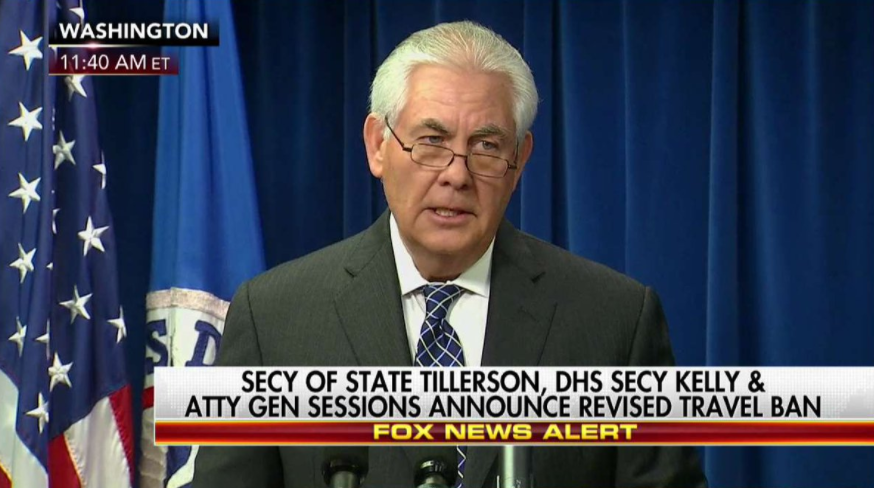 “It is the president's solemn duty to protect the American people,” said Tillerson at a press conference in Washington, D.C. "And with this order, President Trump is exercising his rightful authority to keep our people safe.”

Tillerson called the order “a vital measure for strengthening our national security.”

"This order is part of our ongoing efforts to eliminate vulnerabilities that radical Islamists terrorists can and will exploit for destructive ends," he said.

The secretary of state noted how he and other top Trump administration officials spent the morning briefing Congress on the matter.

Secretary of State Rex Tillerson: "With this order, President Trump is exercising his rightful authority to keep our people safe." pic.twitter.com/s0VKpkshvW

AG Sessions followed with remarks of his own, explaining how the Department of Justice (DOJ) believes the executive order “is a lawful and proper exercise of presidential authority."

"This executive order seeks to protect the American people as well as lawful immigrants by putting in place an enhanced screening and vetting process for visitors from six countries,” Sessions said.

“The executive is empowered by the Constitution and by Congress to make national security judgments and to enforce our immigration policies in order to safeguard the American public,” he explained. “Terrorism is clearly a danger for America and our people.”

Sessions: "Like every nation, the United States has a right to control who enters our country and to keep out those who would do us harm." pic.twitter.com/NthsXzs2fx

Homeland Security Secy. Kelly concluded the news conference by saying that 9/11 "taught us that we could not take our nation's security for granted."

"The fact remains that we are not immune to terrorist threats and that our enemies use our freedoms and generosity against us," he said.

Trump signed the revised executive order Monday morning, suspending travel of refugees and visitors to the U.S. from countries known to have connections to terrorism.

According to Fox News, the revised order will suspend refugee entries for 120 days and drops the original order's indefinite ban on Syrian refugees.

The executive action will also ban travelers from six countries – Iran, Libya, Somalia, Sudan, Syria, and Yemen – from entering the U.S. for 90 days.

The order includes an exception for travelers who obtained a visa before Jan. 27.

Iraq is no longer among the countries of “particular concern.”

The order becomes effective on Mar. 16.