Sanders: Trump Won Because He Fought Political Correctness and Media 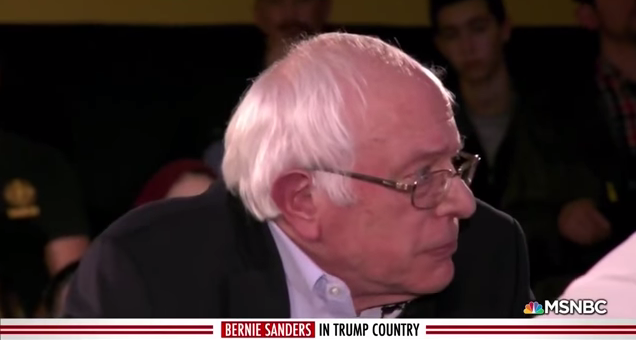 Sen. Bernie Sanders (I-Vt.) cited President-elect Donald Trump's stance against political correctness and his fighting back against the media as reasons why Trump won the election. He also, yet again, defended Trump supporters from the assertion that they’re all a bunch of racists and sexists.

Hayes then asked Sanders, “What do you think about political correctness? What does that mean to you?”

“What it means is you have a set of talking points which have been poll-tested and focus-group-tested and that's what you say rather than what's really going on,” Sanders said. “And often what you are not allowed to say are things which offend very very powerful people. For years and years, we have been told by Republicans, and many Democrats, that our trade policy was a great idea, that it was working for America. Well, you know what? The American people don't believe it.”

Sanders went on to talk about U.S. trade agreements with China and Mexico.

When no one in the audience raised their hand, Hayes then asked, “When you hear ‘political correctness,’ do you think about the way that you are or are not allowed to talk about certain groups of Americans?” Hayes’ second question received a more enthusiastic response.

“Frankly, when we talk about political correctness, are basically just rules about being, not being a jerk,” Hayes insisted.

“I’ll tell you what else he was doing. He was talking about the media. Do people here [think] the media reflects the reality of American society?” Sanders asked to “nos” from the audience. “Right. That’s one on you, Chris.”

While denouncing some of the “taboo” topics Trump spoke about, Sanders said, “One of the arguments as to why Trump won is that most of, or many of, his supporters are sexist or racist or homophobes. I happen to believe that’s not the case. What he did do is he said, ‘You know what? There is a lot of pain in this country.’”

This is far from the first time Sanders has spoken out against the characterization of Trump supporters as racists and sexists, despite Clinton—who he endorsed—using the word “deplorable” to describe Trump supporters.

Sanders has also recently praised Trump for being a “very smart person” who “loves this country.”