Sanders Supports Drones, Wants 'The Strongest Military in the World' 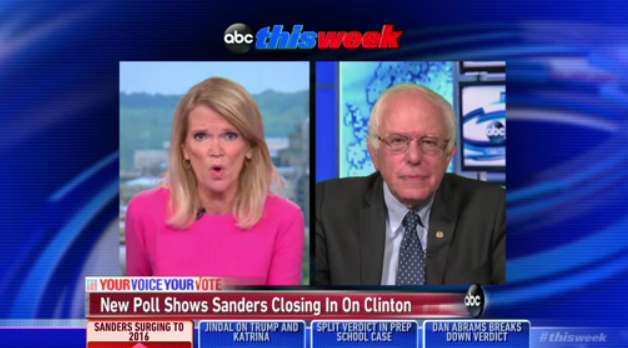 Presidential candidate Sen. Bernie Sanders (I-VT) announced he supports the use of drones “very, very selectively,” would consider going to war even if America isn’t attacked, and believes the United States should have “the strongest military in the world.”

On “This Week,” Martha Raddatz informed Sanders his campaign website is missing a section devoted to issues related to being commander-in-chief: national security and foreign policy. This prompted Raddatz asked Sanders, “Don’t you feel these are issues that a president should be very concerned about?”

“Absolutely, Martha,” Sanders responded. “And we will. You know, in all fairness, we have only been in this race for three and a half months and we’ve been focusing—quite correctly, as you’ve indicated—on the economy, on the collapse of the American middle class, on massive income and wealth inequality.”

“But you’re absolutely right. Foreign policy is a huge issue. Let me just say a word or two about that. And we are going to spend more time on that. You are looking at a senator and a former congressman, and as a congressman, I voted against the war in Iraq. Which I think will go down in history as one of the worst foreign policy blunders that we have ever seen, leading to the enormous destabilization of that region right now. But the issue of foreign policy, how we bring the world together, our allies together, not do it alone, to take on ISIS, to deal with the other threats and problems around the world is a huge issue and I promise you, we will address it.”

The two then began a conversation about Sanders’ foreign policy positions.

After explaining Sanders’ voting record against the Iraq War, against the Gulf War, but in support of the invasion of Afghanistan, Raddatz asked, “Can you tell me what your criteria is for the use of force?”

Sanders explained, “I think historically, in too many instances, the United States has gone to war unilaterally when we should not have.” Sanders continued, stating he believes Saddam Hussein could have been forced out of Kuwait without war.

Sanders vocalized supporting alternatives to war, such as the Iran deal, but that “there are times when you have to use force.”

“Look, I am supporting President Obama’s effort to make certain that Iran does not get a nuclear weapon. But I get very nervous about my Republican friends who keep implying that the only way we can do that is through another war. War is the last resort, not the first resort. Yeah, there are times when you have to use force. No question about it. But that should be the last resort.”

Raddatz then questioned Sanders about when he thinks it would be appropriate to go to war: “And is that only when we’re attacked? Is that only when we are attacked? Raddatz asked. “Because if you look at your record, you supported the invasion into Afghanistan after we were attacked. Is that the only time you would support it?”

“No, not at all. Not at all,” Sanders responded. “You know, I think, using our military is an option, obviously, that we will always have under certain circumstances. But it is the last option.”

“So yes, there are times when you have to use military force, no question about it. I am prepared to do that,” Sanders announced.

Raddatz then asked Sanders for his thoughts about the controversial drone program, which many Sanders supporters and Progressive activists decry as unconstitutional.

“Would you do away with the drone program? Because you have clearly had problems with that,” Raddatz stated. “You didn’t vote for CIA director John Brennan because of the drone program and how it was run…”

“Martha, what you can argue is that there are times and places where drone attacks have been effective. There are times and places where they have been absolutely counter-effective and have caused more problems than they have solved. When you kill innocent people, what the end result is that people in the region become anti-American who otherwise would not have been. So I think we have to use drones very, very selectively and effectively. That has not always been the case.”