According to this, Reuters quickly deleted a tweet calling Anti-Trump protesters "peace activists" after a slew of users pointed out the violence in Phoenix rally that took place this week.

The tweet also featured a crowd of people outside of a pro-Trump rally Tuesday. 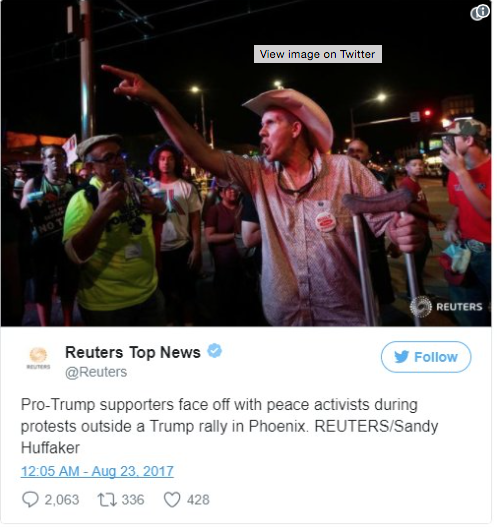 Reuters actually labeled anti-Trump protesters as "peace activists," which was a far cry from police reports of them throwing bottles and inciting all kinds of mayhem. Police had to launch tear gas canisters in an effort to disperse the crowd. Sgt. Jonathan Howard of the Phoenix Police Department told CNN, "People in the crowd began fighting and throwing rocks and bottles at police."

"They also dispersed some gas in the area. Police have responded with pepper balls and oc (pepper) spray in an attempt to disperse the crowd and stop the assaults," he added.

While speaking at a news conference, Phoenix Police Chief Jeri Williams said that two people had been arrested for aggravated assault and another person for criminal damage.

Online users responded on Twitter in a series of posts, denouncing Reuters for their terribly inaccurate choice of words. Here are just a few of their responses, as collected by The Blaze:

Reuters quickly the tweet and reposted their story with different wording before issuing this correction:

While there's still plenty of left-wing media bias to go around, perhaps Reuters, at least, is realizing it's no longer going to fly.