Rep. Trey Gowdy (R-S.C.) released a statement announcing that he will not be seeking re-election in the 2018 midterm elections. Gowdy is currently the chairman of the House Oversight Committee, but he is retiring in order to go back to working in the justice system.

"I will not be filing for re-election to Congress nor seeking any other political or elected office; instead I will be returning to the justice system," Gowdy said in a statement he tweeted out.

The former federal prosecutor was elected to Congress in 2010. He quickly gained fame for his role in investigating Obama administration scandals on the Oversight Committee and then as the chairman of the House Select Committee on Benghazi.

The 53-year-old Gowdy, a member of the House Intelligence Committee, has been outspoken about the FBI’s investigations into 2016 Democratic presidential candidate Hillary Clinton’s email practices, as well as the Russia probe involving President Trump and his aides. Most recently, he has been a proponent of publicly releasing the House Intelligence Committee memo on alleged government surveillance abuses.

Gowdy has been a favorite of conservatives over the years for his no-nonsense brand of questioning while serving on multiple committees. 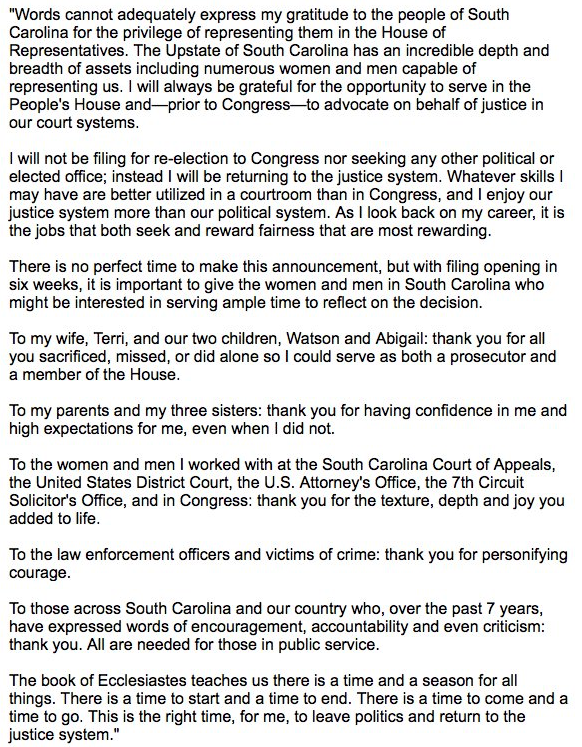 Good luck in all of your future endeavors, Rep. Gowdy!