Rep. Ocasio-Cortez Expresses ‘Shock’ That Lobbyists Pay Homeless And Others

Even though there’s websites like Skip The Line and others in DC that help people get hired to hold a place in line, Rep. Alexandria Ocasio-Cortez (D-NY) claims that “shock doesn’t begin to cover it” after learning lobbyists pay the homeless and others to secure seating at public hearings.

Ocasio-Cortez  (D-N.Y.) tweeted on Wednesday, "Shock doesn’t begin to cover it. Today I left a hearing on homelessness & saw tons of people camped outside committee. I turned to my staff and asked if it was a demonstration. 'No,' they said. 'Lobbyists pay the homeless + others to hold their place so they can get in 1st.'" 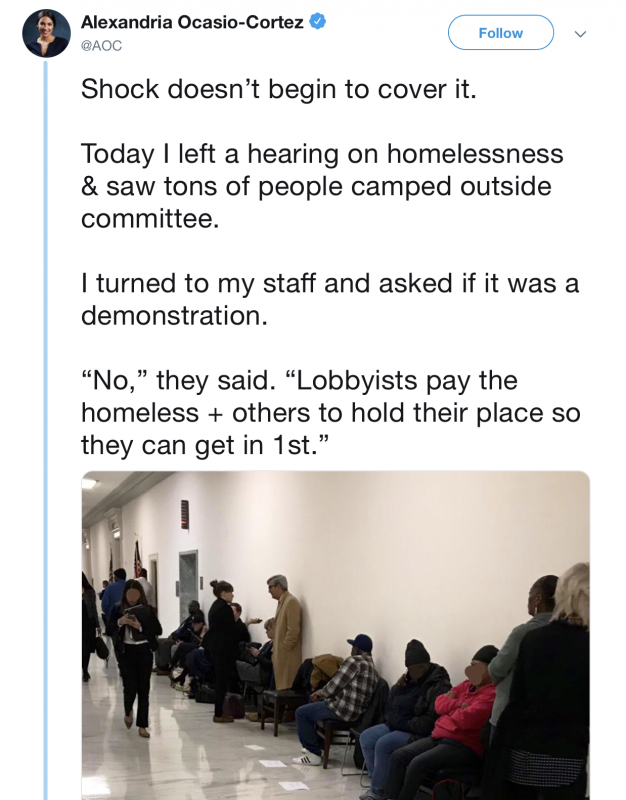 Later AOC tweeted, “Apparently this is a normal practice, and people don’t bat an eye.
The first few people in line are guaranteed a seat in a given hearing. This was the hearing for marijuana banking laws. Lobbyists and those who can afford it pay people to hold their spot so they get in 1st.”

Of course the common practice in the DC area also applies for waiting for new iPhones and desirable concert tickets, but Ocasio-Cortez didn’t mention that.

She also left out of her twitter commentary the long lines people stand in to purchase food in socialist Venezuela, where young people once earned money for holding places in food lines.

Perhaps, no one can afford the practice there anymore.