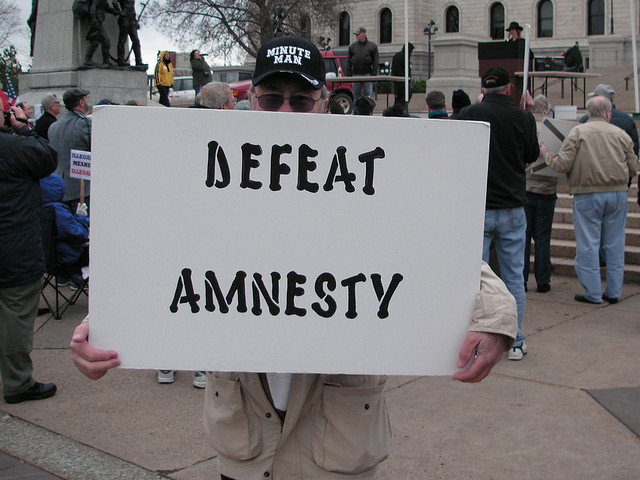 Rep. Michael McCaul (R-Texas) responded to criticism of his “border security” bill today in an exclusive statement to MRCTV.

McCaul’s bill has come under fire from the union representing U.S. immigration officers, which says Americans should be outraged by the bill. “It’s not border security if anyone can recite the magic words and get waved right on in,” Kenneth Palinkas, President of the National Citizenship and Immigration Services Council representing 12,000 United States Citizenship and Immigration Service (USCIS) adjudicators and personnel said.

Rep. McCaul, chair of the House Committee on Homeland Security, tells MRCTV that his committee doesn’t have jurisdiction over immigration enforcement inside the U.S., which is USCIS’s area of responsibility:

"The Committee on Homeland Security does not have jurisdiction over interior enforcement or the immigration policy that USCIS is charged with carrying out.”

This bill is just a first step in the effort to secure the border, Rep. McCaul adds:

“House Republicans are taking a step-by-step approach and as such 'Secure Our Borders First' bill deals solely with the problem at our southern, northern, and maritime borders. This is a problem that has plagued this country for 25 years. The insecurity of our borders is a national security concern, and the number one provision in the Constitution is to provide for the common defense of our country. My constituents in my home district and my home state of Texas spoke loud and clear. They want the border secured."

But, McCaul’s colleague, Rep. Dave Brat (R-Va.) warns the dishonestly-named “border security” is no such thing:

“The most troubling aspect is this Trojan horse thing. If you pass a bill called ‘border security,’ then the other side is going to say, ‘Hey, look, we already did it, we passed border security, so now it’s time for step two, which is amnesty-- let everyone in, legalize them, because we now have a secure border.’”

“It does not secure the border. It leaves authority in the hands of President Obama on that issue. And just look at what President Obama has done with ObamaCare, etc. and he’s riding roughshod over the law. And we’re going to give… $10 billion dollars… to leave the authority in the hands of someone who already doesn’t want to enforce the border? "

Rep. McCaul contends that the bill does, indeed, help secure the border by adding border fencing where it’s most needed and improving the technology used for enforcement:

“The federal government’s number one priority under the Constitution is to provide for the common defense, but when it comes to border security the administration has failed. Failure is not an option on this issue, so Congress must lead.

“The Secure Our Borders First Act ensures a smart, safe, and cost-effective border by building fencing where fencing is needed and allocating technology where technology is needed. It is the toughest border security bill ever before Congress, with real penalties for the administration for not doing their job. We need this legislation to protect the American people and sovereignty of this nation.”