Rep. Gohmert: FBI's Recommendation Not to Prosecute Clinton Based on a Lie 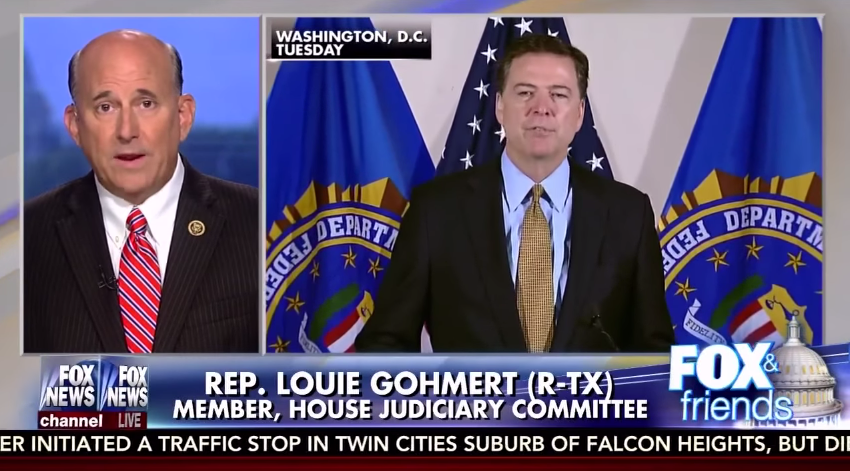 In a Thursday morning appearance on "Fox & Friends," Rep. Louie Gohmert (R-Tex.) weighed in on the FBI’s recommendation not to prosecute former secretary of state Hillary Clinton for mishandling classified information.

He argued that the FBI's conclusion was based on a lie that there was no direct evidence of criminal intent.

“We were expecting the FBI to make a recommendation and yet he [James Comey] goes out on a limb and says ‘no decent prosecutor would do this’ – which was a lie,” said Gohmert. “He said there was no direct evidence of intent. When somebody says, ‘take the header off of a classified document and send it by unclassified means,’ you have direct evidence.”

“There’s all kinds of evidence here and there’s been a lot of people who have been treated much harshly, including Petraeus,” he argued.

FBI Director James Comey testified before Congress on Thursday regarding the Bureau’s investigation.

He said that while Clinton was “extremely careless,” the FBI did not find sufficient evidence to establish criminal intent.

Gohmert said on Fox & Friends that the investigation was not "just about emails."

“It’s not just about emails,” he said. “Chairman Bob Goodlatte had several great questions – and the last one had to do with ‘what about the selling of the office?’ I mean, I don’t know of anybody but corrupt dictators who have profited from their office the way Hillary Clinton has. That was supposed to be under investigation. What happened to that?”

Listen to the rest of his remarks below.