Rep. Franks: Abortion is the ‘Greatest Human Rights Atrocity in the U.S. Today’ 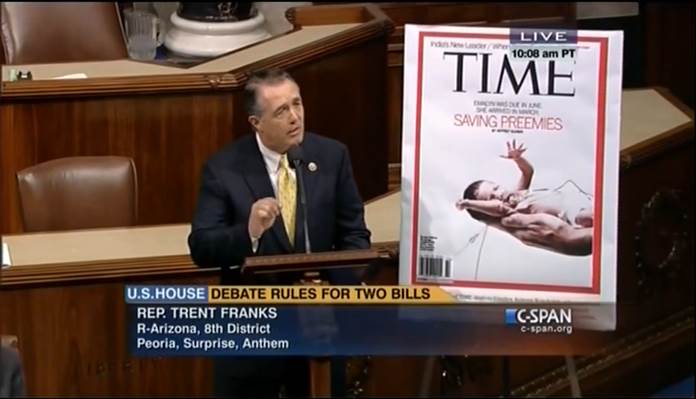 Franks examined how more than 18,000 late-term abortions are occuring in America each year. He said that, despite polls that suggest the majority of Americans are in favor of protecting unborn children,

"We have given these little babies less legal protection...than farm animals under the Federal Humane Slaughter Act."

Speaking on the House floor, the Congressman pleaded with his colleagues to acknowledge the importance of this issue:

“A great shadow looms over the Home of the Brave. More than 18,000 very late-term abortions are occurring in America every year, and placing the mothers at exponentially greater risk, and subjecting their pain-capable babies to torture and death without anesthesia.

"It is the greatest human rights atrocity in the United States today.

“Almost every other major civilized nation on earth protects pain capable babies at this age, and every credible poll of the American people shows that they are overwhelmingly in favor of protecting them. And yet, we have given these little babies less legal protection from unnecessary, painful cruelty than the protection we have given farm animals under the Federal Humane Slaughter Act.

“But Mr. Speaker, I would submit to you that today, the winds of change have begun to blow and that the tide of blindness and blood is finally turning in America. Because, today, we take up the Pain Capable Unborn Child Protection Act in this chamber. It is not a perfect bill, Mr. Speaker. Each one of us would have written it a little differently, if we could have done so.

“However, no matter how it is shouted down, or what distortions, or deceptive what-ifs, distractions, diversions, ‘gotchas,’ twisting of words, changing of the subject, or blatant falsehoods the abortion industry hurls at this bill and its supporters, this bill is a deeply sincere effort, beginning at the sixth month of pregnancy, to protect both mothers and their pain capable unborn babies from the atrocity of late-term abortion-on-demand. And ultimately, it is one all humane Americans can support, if they truly understand it for themselves.

“Mr. Speaker, what we are doing to these babies is real. And we all know it. And it is time to change and protect them. And with that I yield back.”

On Thursday, hundreds of pro-life men, women and children will gather for the annual March for Life, set to take place on Washington, D.C.’s National Mall, where this bill will undoubtedly be discussed.

Watch the video for his full statement below.