Record High of Americans Believe Reporters Out to ‘Block the President’

According to polling data, the percentage of Americans who distrust the political news in August matches the record high percentage of 54% set in April of last year.

Just 32% say they trust “the political news they are getting,” meanwhile 14% poll undecided.

The poll also recorded a new record high percentage of voters (51%) who believe most reporters with their news coverage are just “trying to block the president from passing his agenda.”

Only four percent (4%) think most reporters are trying to help Trump pass his agenda, while 36% say they are simply interested in reporting the news in an unbiased manner.

By comparison, 48% thought most reporters were trying to help President Obama pass his agenda in 2010 when Rasmussen Reports first asked this question.

This poll comes amid an ongoing feud between the current administration and the news media regarding biased and incomplete coverage.

Most recently, President Trump criticized the media for its polling for the 2020 presidential race and its reporting about the economy and fears of a possible recession in the U.S. 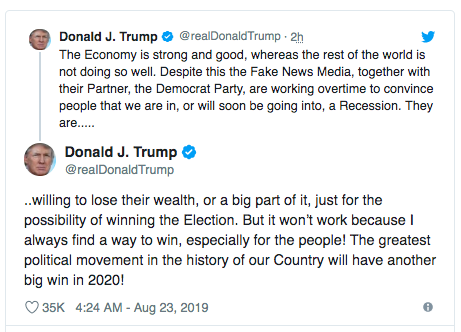 The Rasmussen poll of 1,000 likely U.S. voters was conducted Aug. 20-21 and has a margin sampling error of 3 percentage points.