Just days after President Donald Trump announced his nomination for the new Director of National Intelligence (DNI), Rep. John Ratcliffe (R-Texas) has decided to stay in Congress instead of face the unrelenting scrutiny of who Trump called, the ‘LameStream Media.”

The president sent out a tweet Friday afternoon both praising Ratcliffe for the “outstanding job” he has done as a member of Congress, while also calling out the media for their “slander and libel” anytime a Trump nominee is up for confirmation. 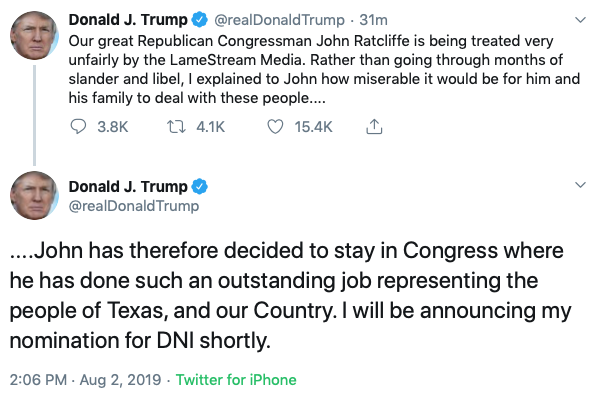 It's both sad and understandable that nominees for high-ranking positions within the Trump administration have to take the actions of the media into account before fully deciding whether or not to advance their careers. The media has done the country a serious disservice by making the prospect of continued public service, at higher levels, unappealing because of witch-hunt tactics towards anyone Trump nominates for any position.

As seen above, Trump also stated that he will announce a new DNI nominee “shortly.” There’s no word whether that means an announcement will come within minutes, hours or days.

Trump originally announced Ratcliffe as his choice on Twitter Sunday afternoon following the resignation of outgoing DNI Dan Coates. Coates’ last official day will be August 15th, according to the former senator from Indiana’s resignation letter.