It seems that Sen. Rand Paul (R-Ky.) has had just about enough of trying to protect the mysterious “whistleblower,” especially when everyone claims to not know the identity of said whistleblower.

According to Fox News’ Marisa Schultz, Paul commented during a press conference that his question, which Chief Justice John Roberts refused to allow during Thursday's question and answer session of the Senate impeachment trial of President Donald Trump, made no reference “to anybody who may or may not be a whistleblower.”

I think this is an important question. One that deserves to be asked. It makes no reference to anybody who may or may not be a whistleblower.

I think it was an incorrect finding to not allow a question that makes no reference. It means that anybody that anybody ever said might have been a whistleblower could never be discussed in a proceeding. I think it's very important whether or not a group of Democratic activists, part of the Obama-Biden administration, were working together for years looking for an opportunity to impeach the president.

But Paul’s press conference wasn’t the only place where the senator spoke about his denied question.

Almost as a companion to the press conference, Paul sent out a series of tweets that, not only repeated the point of his question not being about the “whistleblower,” but also revealed what his question was had it been allowed by Roberts.

“My exact question was:” Paul began. “Are you aware that House intelligence committee staffer Shawn Misko had a close relationship with Eric Ciaramella while at the National Security Council together and are you aware and how do you respond to reports that Ciaramella and Misko may have worked together to plot impeaching the President before there were formal house impeachment proceedings.” 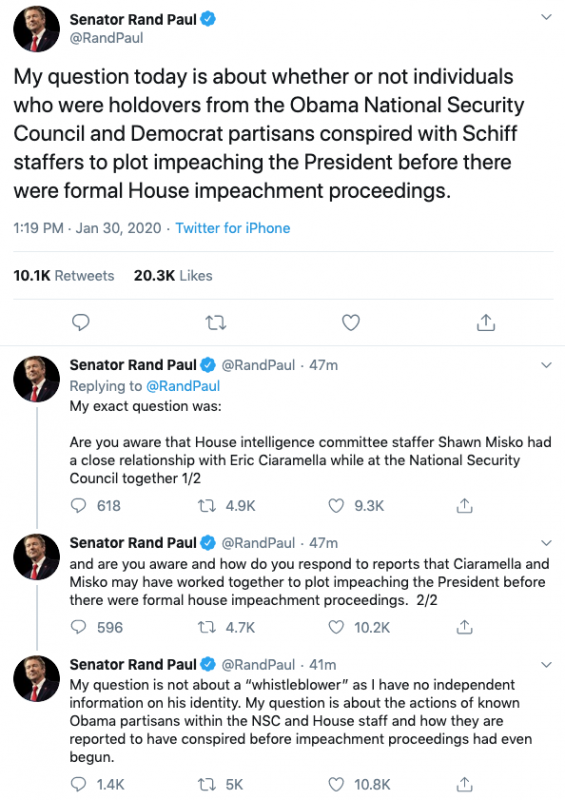