Anti-Second Amendment activists continue to find different ways to bitch and moan about inanimate objects and organizations that have never killed anyone. Their prime target is the National Rifle Association and anyone who has any affiliation with the organization.

Activist groups and individuals seem to have been specifically targeting the chief lobbyist for the Institute for Legislative Action (ILA) Chris Cox and his family. (The ILA is the lobbying arm of the NRA.)

“Mr. and Mrs. Cox have been targeted over the past few months by repeated acts of criminal and unlawful conduct, including having their home vandalized on two occasions and Mrs. Cox’s business on another occasion,” the family said in a statement, according to the Washington Post. “These coordinated tactics have crossed the line of civility and human decency.”

The Washington Post reported that Cox's house was allegedly splashed twice with red paint to represent the blood of people who have been killed by other people. Activists also created a fake website with pictures of murdered children to negatively affect Cox's wife's business, while also handing out fliers also designed to hurt his wife's place of business. It's not exactly clear who carried out the actions, but there are suspects.

A new activist group called “The Great American Gun Melt” has been doing some of the protesting of Cox and his family — although from the details of it, it sounds like harassment.

It’s kind of sick that these activists spend more time harassing an organization [NRA] and a family — who by the way have never shot and killed anyone — then actually learning about firearms. It’s more than likely that not one of these people have ever fired a weapon, which means it’s pretty clear that they have no intention of trying to understand the other side of the gun control argument.

Amanda Gailey, from Nebraska, and Catherine Koebel, from southwestern Virginia, met through gun control activist circles and connected over agreement that the movement has been too timid. Calling themselves “The Great American Gun Melt,” they want to pull gun control politics to the left with more radical action.

The Great American Gun Melt co-founders Gailey and Koebel-Stromberg have no interest in guns existing at all — for any reason — judging by their new Facebook page. Koebel-Stromberg has even gone so far as to say that “guns endanger gun owners via suicide” and that people should be “educating gun owners on the danger to their lives that their guns pose.”

That’s absolutely right! Gun owners need to be careful when they’re not carrying their guns. One of these dastardly guns could jump up and shoot them without warning or a person pulling the trigger.

Suicide is obviously a tragic occurrence when it happens, but would these people be calling for a ban on any other instrument people use to end their lives? The answer is no, so gun control activists' suicide argument falls more than flat.

Do these morons really think that gun owners don’t think a gun could ever be dangerous? Of course people know they’re dangerous. That’s why they lawfully own firearms, in order to protect themselves and their families.

According to The Great American Melt’s “About” section on their Facebook page, the group claims to be the “left flank of Gun Control.”

“The gun industry is killing Americans and American civic life, we seek to destroy it,” their “About” section reads. “Guns kill, melt the guns.”

People primarily do the killing. Should we get rid of them, too? I better not ask that question, because some of them might answer in the affirmative.

If you want to see just how vile Gailey and Koebel-Stromberg are, all you need to do is read a letter they sent to the NRA’s Assistant General Counsel Morgan Shields after they had received a trespassing warning from the NRA.

Here’s their letter to Shields: 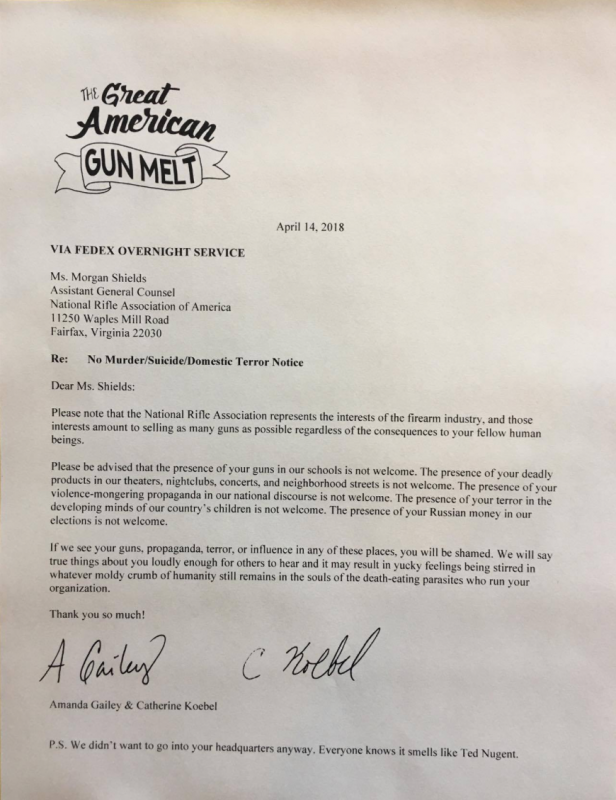 Looks like it’s time to break out the tin foil hats and gauge which planet these women came from.

“It is aggressive,” Gailey admitted. “I wouldn’t do that unless we were protesting someone who I believe is a truly indefensible human being.”

It also doesn't hurt when a major publication - like the Washington Post - basically does a fluff profile article on your radical organization.

It’s fine to protest. That’s anyone’s First Amendment right. But, when you begin to affect a person’s personal life and try to ruin their wife’s business, because you literally have nothing better to do, that’s when it stops being protesting and begins being harassment.