After facing vandalism and backlash via social media on account of its “racist” name, the Chinese-owned "Chop Chop Chinaman" restaurant has closed its doors.

In March, owner Larry Lee’s restaurant made headlines after anti-racism activist Jeannie Harrell used lipstick to scribble on the store's front window a message denouncing the establishment's name. She then bragged about the illegal act on Twitter. 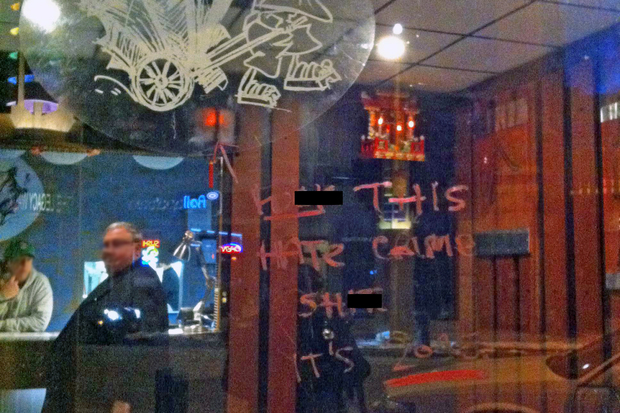 According to Harrell, the Chicago restaurant's name was a “hate crime” as the word "Chinaman" is a racist slur. Outraged by the sight of the name, the anti-racism activist, who is not Chinese, took a stand against Chinese discrimination by vandalizing a Chinese restaurant owned by a Chinese man.

As a consequence of her actions, the unrepentant Harrell has been arrested for criminal damage to property, due in court soon on June 9.

Given the strange nature of the case - a woman using a tube of lipstick to vandalize a store and documenting her crime on Twitter - her story went viral.

Individuals took to Yelp to leave negative reviews of the restaurant. As a result, the restaurant now only shows a rating of one to one-and-a-half stars. While many of the reviews mention poor food quality or bad service, other reviews reflect on the “racist” nature of the restaurant's name.

People also posted negative reviews onto Chop Chop Chinaman's Facebook page. One such review encouraged others to report the restaurant’s page to Facebook for it to be removed.

In an interview with Chicago Tribune, Lee commented on the backlash he has received after Harrell's actions went viral:

"The backlash, Lee would like to note, has come entirely via anonymous online posts and phone calls. Matters escalated after Harrell shared her story to the neighborhood news website, DNAInfo. That day, over three hours, the restaurant received a few dozen prank phone calls. Lee said one man called the restaurant 32 times and told Lee to 'watch your back.' Another prankster claimed to be from the Ku Klux Klan and was goading Lee into saying something inflammatory against the Chinese."

Not deterred by the negative attention, Lee told the publication that he hopes to reopen his restaurant in the future once he finds investors.