The man who has claimed responsibility for putting manure on U.S. Treasury Secretary Steve Mnuchin’s lawn over the weekend is apparently responsible for treating other people’s mental health.

According to AL.com, a Los Angeles man named Robby Strong has come forward and provided evidence that he is the man responsible for gift-wrapping manure that was placed outside Mnuchin’s home in Bel-Air. The suspicious package was investigated by a bomb squad after a neighbor noticed it outside.

On Facebook, Strong posted a photo of a note “To Stevie.” Inside the card, Strong wrote,“Mrs. Mnuchin & Trump, We’re turning the ‘gift’ of the Christmas tax bill. It’s bullshit. Warmest wishes, the American People.”

In another Facebook post, Strong solicited volunteers to help him “deliver boxes of horse shit to Steve Mnuchin”: 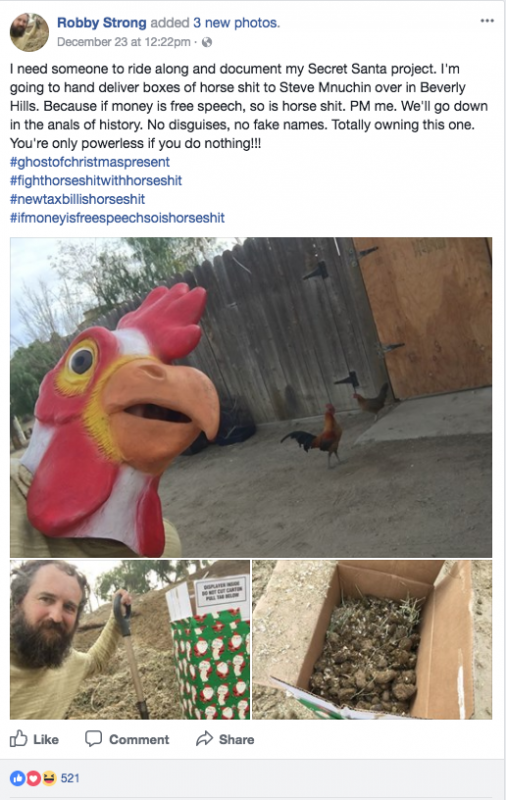 Despite the nature of hand delivering manure to the U.S. Treasury Secretary’s home, on Strong’s Facebook page, he lists himself as a psychologist at the Los Angeles County Department of Mental Health in Hollywood. He also claims he studied psychology and theology at Fuller and manages an organization called Gonzo Theology. 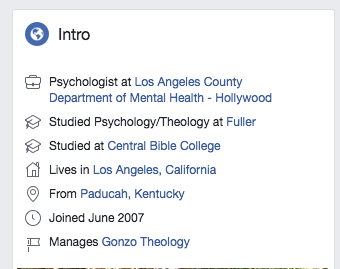 In a YouTube video, Strong references his time in seminary school. He also compares himself to Martin Luther, saying like the 95 Thesis, he delivered his “95 Feces”:

In an interview with AL.com, Strong called the manure a mere “prank.”

“It was a gift-wrapped package of poo, something a frat boy may do to another frat boy," he explained. “I was hoping to meet [Mnuchin.] I wanted to ring the door and hand it to him myself.”

However, he told KPCC that his gesture was inspired by Jesus.

“What I did, I would like to compare to what Jesus did when he went into the temple and overturned the tables of the moneychangers, who were exploiting the people financially in the name of religion. I feel like that's what the GOP has done to the American people,” he said.