At the NH Statehouse in Concord, Saturday, October 2, I had the opportunity to mingle with more than 1,500 New Hampshire residents rallying against the state government accepting $27 million from the feds to promote mRNA injections and the finalization of a state “vaccine registry.”

Curiously, although the lone major network affiliate, WMUR-TV for over a year has offered alarmist, inflated CDC numbers regarding COVID19 deaths and cases in the state, it appears that they did not cover the huge march.

In fact, the tricky ethical problems of any jabs that are created with the aid of aborted fetal cells, the problem of mandates, privacy, and of federalism have been bubbling in New Hampshire for as long as various interest groups stirred the pandemic fear, and, while he has not been as bad as other state “rulers,” Governor Chris Sununu (R) has not come across as the most stalwart defender of freedom or of constitutionalism.

In March, last year, Sununu ordered restaurants to close for any indoor dining. In November, last year, he mandated that restaurants collect contact info and share that with the state – contrary to the Fourth Amendment. And in November, last year, Sununu issued another unenforceable “Executive Order” mandating masks for anyone over the age of five years who was “in public.” Throughout the summer of last year, he removed his domineering dining restrictions in bits and pieces, based on region, and the mask mandate expired in April of this year.

The GOP-led NH legislature also passed a “Medical Freedom Act” this year that Sununu signed in July, and it states, in part:

Evidently, politicians don't realize that the US Constitution already supposedly protects the right to be free of any threat or compulsion regarding medical intervention. But, Sununu has not explicitly addressed this fact. Nor has he ever acknowledged the fact that all of his mandates have violated the Contract Clause of the US Constitution, which prohibits state politicians from inhibiting the fulfillment of a previously existing contract between state residents or those made by state residents with people outside the state. He has not addressed the towering breaches of the Bill of Rights which the mandates represent, and he has not addressed the problem of broken federalism represented by DC regulations and federal money “grants” to any state. 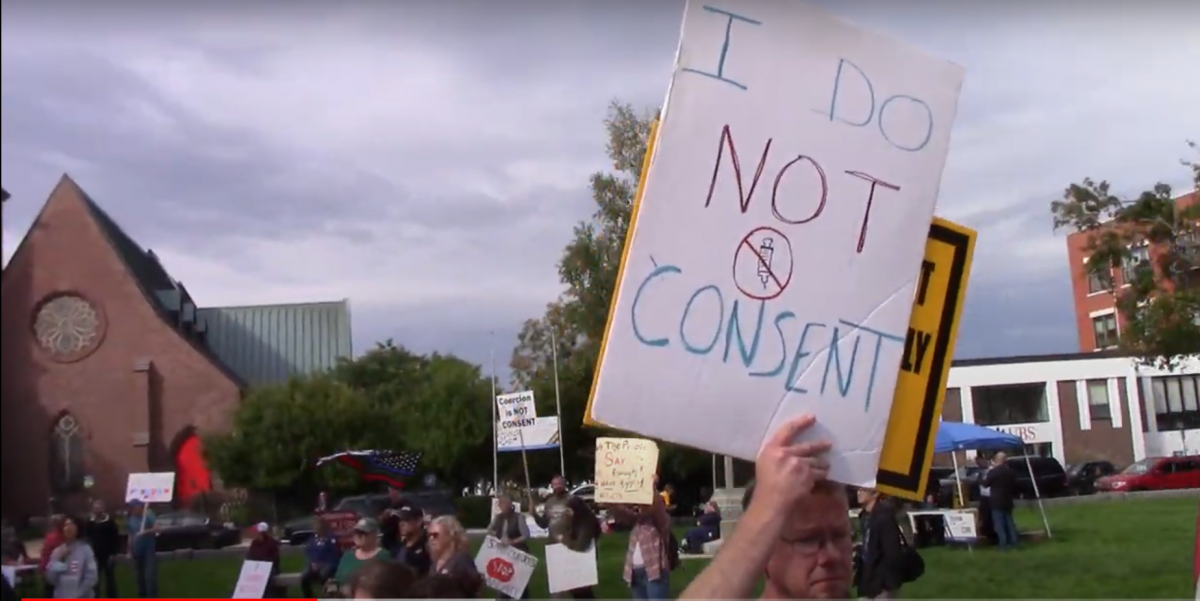 Now, the matter is coming to a head, as the feds dangle $27 million in tax cash and money invented by the Federal Reserve… It’s in the form of two grants that the Biden Administration is ready to hand to NH to help promote the jabs and help NH complete an online “vaccine registry,” something it is the only state in the US not to have finalized.

That status – of being the only state NOT to have a “vaccine registry” – would seem appealing to those who understand the right to privacy and the Fourth Amendment, but the state position has been a sore spot for many leftists since 2019, before the COVID-19 hysteria hit the Granite State.

And many leftists do not like the idea that informed NH residents are gathering to oppose the acceptance of the federal cash.

Two bodies of NH government must hear and give their okay to acceptance before the Governor can truck in the lucre from DC. These are the five-member, elected, Executive Council, and the Fiscal Committee of the General Court, a ten-member group of state Reps and Senators who give recommendations to the Executive Council and Governor.

At an Executive Council meeting held, strangely, on a private college campus last week, hundreds of protestors lined the streets holding signs, and police barred most from entering. Those who did get to enter were vocal enough about the lack of openness to see some members of the Council leave and the meeting shut down.

As it stands, the Fiscal Committee has tabled the proposal, which would pay for 13 temporary “employees” to promote the jabs, would pay for “equipment,” and would go towards finalizing the jab registry, and the Executive Council will meet… somewhere as yet unannounced.

At Saturday’s rally, the prevalent opinion was that many politicians were dragging their heels in order to accept the cash.

And that often is the problem seen by many liberty-minded people in many states. The enticement of federal money is something that many state politicians don’t resist. They overlook the fact that there is no enumerated power in the US Constitution to hand out cash in this way, no enumerated power to create a Department of Health and Human Services or Occupational Safety and Health Administration, or Federal Aviation Administration, or myriad other of the alphabet soup agencies that have attached themselves like groupers onto the sides of generations of Americans. And so the politicians work slowly, turning the worm, to finally, finally, get the cash.

In NH, the fight will go on, even as pop media in the state overlook the arguments made by those who fight against this government overreach and this privacy invasion.

This is an important matter, and the folks I met on October 2 are much better informed than most people when it comes to the “pandemic,” to the risks and benefits of the jabs, and to the matters of federalism and rights.

The question in NH remains: how well informed are the members of the Executive Council, the Fiscal Committee, and Governor Chris Sununu?