A group of people (environmentalists? activists? progressivists? Honestly, I’m not sure) over at Union Theological Seminary tweeted a photo Tuesday explaining they’d spent the day “confessing to plants" as part of a "worship" service held in honor of the planet.

As in, they talked to a pile of ferns and potted shrubs set up in the middle of the floor. In fact, you really have to see it to believe it, so here goes: 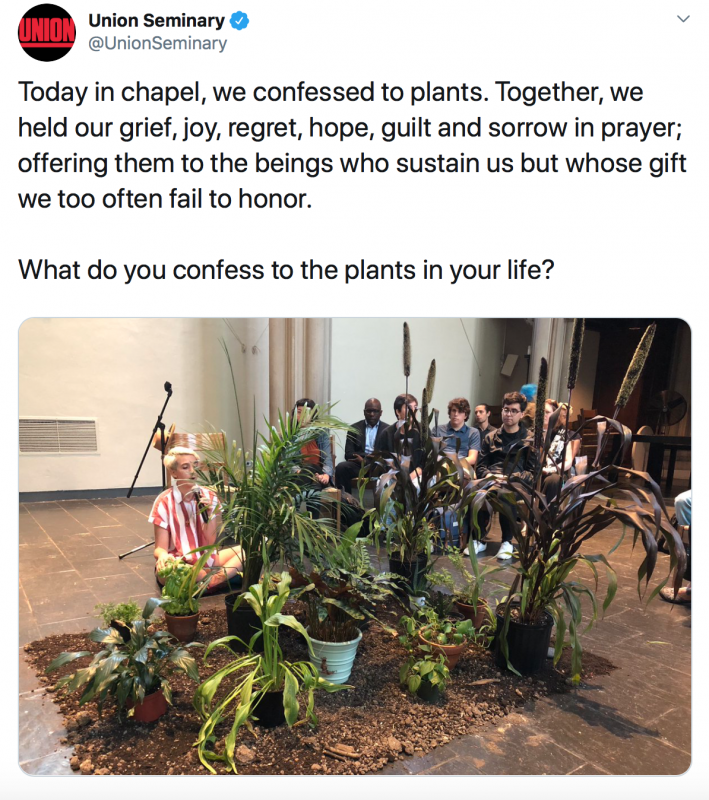 And no, for those of you who are hoping to sweet baby Moses in the bullrushes that this whole thing is a joke meant to criticize the far-left’s weird obsession with the flora, these folks are being entirely serious. The “worship” service (their words, not mine) was part of a class called "Extractivism: A Ritual/Liturgical Response," and actually included a confession to some ficus trees repenting for how terrible, awful, no-good, very bad humans have treated them.

“In worship, our community confessed the harm we've done to plants, speaking directly in repentance. This is a beautiful ritual,” Union said in a tweet.

In fact, Union’s a little pissed anyone thinks their prayers to the petunias are weird and ridiculous in the extreme.

What's different (and the source of so much derision) is that we're treating plants as fully created beings, divine Creation in its own right—not just something to be consumed.

Because plants aren't capable of verbal response, does that mean we shouldn't engage with them? /8

So, if you're poking fun, we'd ask only that you also spend a couple moments asking:

Do I treat plants and animals as divinely created beings?

What harm do I cause without thinking?

How can I enter into new relationship with the natural world? /9

Based in New York City, Union Theological Seminary is a non-denominational institution that espouses a far-left version of “Christian” doctrine, including interfaith teaching, an emphasis on social justice, and a heavy focus on environmentalism.

Thankfully, according to their own website, they only have 266 students.