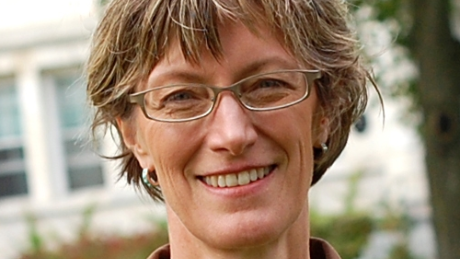 Middlebury College professor of politics and economics Allison Stanger was attacked by left-wing, so-called AnftiFa (an ironic abbreviation for supposed “Anti-Fascists”) protesters on March 2, merely for attending a speech by, and talking to, conservative/libertarian author Charles Murray in the rustic Sandersesque, Flower-Power enclave of Middlebury Vermont.

Evidently hungering for more than Phish bootlegs, Ben & Jerry’s binges, and baths in patchouli oil, the “protesters” (more precisely called thugs) decided that they needed to shut down free speech and send Professor Stanger to Middlebury Hospital in order to satisfy their wanton self-righteous egos. She emerged with a neck brace and horrified thoughts about her attackers.

Writing about her experience on Facebook, Professor Stanger said:

“One thug grabbed me by the hair and another shoved me in a different direction. I noticed signs with expletives and my name on them.”

But that’s getting ahead of the story. Here's Stangers' own explanation for why she even attended Murray's speech in the first place:

“I actually welcomed the opportunity to be involved, because while my students may know I am a Democrat, all of my courses are nonpartisan, and this was a chance to demonstrate publicly my commitment to a free and fair exchange of views in my classroom. As the campus uproar about his visit built, I was genuinely surprised and troubled to learn that some of my faculty colleagues had rendered judgment on Dr. Murray’s work and character, while openly admitting that they had not read anything he had written. With the best of intentions, they offered their leadership to enraged students, and we all now know what the results were.”

Just as in Berkeley, New York, and other locations, the end result was a sadly predictable display of so-called AntiFa violence that has become synonymous with leftist protests. Stanger explained:

“I want you to know what it feels like to look out at a sea of students yelling obscenities at other members of my beloved community. There were students and faculty who wanted to hear the exchange, but were unable to do so, either because of the screaming and chanting and chair-pounding in the room, or because their seats were occupied by those who refused to listen, and they were stranded outside the doors.

I saw some of my faculty colleagues who had publicly acknowledged that they had not read anything Dr. Murray had written join the effort to shut down the lecture. All of this was deeply unsettling to me. What alarmed me most, however, was what I saw in student eyes from up on that stage. Those who wanted the event to take place made eye contact with me. Those intent on disrupting it steadfastly refused to do so. It was clear to me that they had effectively dehumanized me.”

Sadly, as we know, things got worse.

“Things deteriorated from there as we went to another location in an attempt to salvage the event via live-stream for those who were still interested in engaging. I want you to know how hard it was for us to continue with fire alarms going off and enraged students and outside agitators banging on the windows. I thought they were going to break through, and I then wondered what would happen next. It is hard to think and listen in such an environment. I am proud that we somehow continued the conversation.”

“We confronted an angry mob as we tried to exit the building. Most of the hatred was focused on Dr. Murray, but when I took his right arm both to shield him from attack and to make sure we stayed together so I could reach the car too, that’s when the hatred turned on me… Once we got into the car, the intimidation escalated. That story has already been told well.

What I want you to know is how it felt to land safely at Kirk Alumni Center after taking a decoy route. I was so happy to see my students there to greet me. I took off my coat and realized I was hungry. I told a colleague in my department that I felt proud of myself for not having slugged someone. Then Bill Burger charged back into the room (he is my hero) and told Dr. Murray and I (sic) to get our coats and leave—NOW. The protestors knew where the dinner was. We raced back to the car, driving over the curb and sidewalk to escape quickly. It was then we decided that it was probably best to leave town.”

Getting a chance to calm down, Professor Stanger soon realized that the pain she was starting to feel in her neck needed addressing, and her husband brought her to the ER.

The “opponents of fascism” continued to riot in response to the simple fact that a man was expressing his opinions to willing listeners. This is, of course, part and parcel to what real fascists do, and what real fascism is.

It seems that contemporary leftists believe fascism is “hating someone for being different," and using the police, business, or a “societal patriarchy” to engage in overt or covert violence.

What they rarely acknowledge -- or perhaps even understand -- is that fascism has a very specific meaning. It is the political arrangement whereby the means of economic production are “nominally” owned by individuals or corporations, but are ultimately commanded by the state. It is, as a result, anti-individualist, anti-private property, and anti-dissent.

One does not produce “goodness” or “fairness” via the agency of violence, be it personal or state violence. And one cannot claim to be anti-fascist when engaging in the epitome of fascist tactics, embracing fascist ideology, and hiding behind flags of self-congratulatory righteous indignation.

It's too bad kids don't learn that in school.