Professor Grants Student An Extension Because Her Boyfriend Dumped Her

In a stunning display of a lack of maturity and professionalism, a college student thought it was appropriate to email her professor about her recent breakup to get an extension on an assignment. Even worse, the professor fed this sense of entitlement by granting the extension.

A tweet from Rachel Harriman, a 19-year-old student at Ohio State University, went viral after she posted the email she sent her professor requesting an extension on an assignment because her boyfriend broke up with her.

In her email, Harriman told "Professor Steigerwald" she was an “unfocused mess” as a result of the breakup, and therefore would be unable to turn in the assignment at the appropriate time. 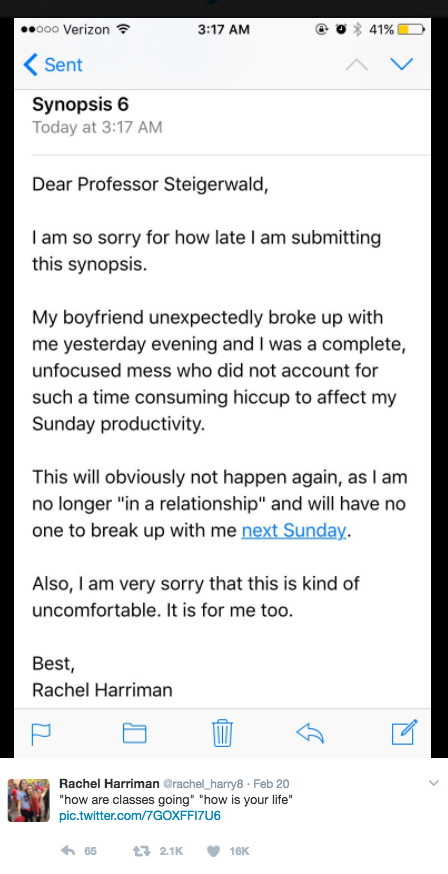 The internet, and various news sources, rallied behind Harriman for her honesty.

According to BuzzFeed, the professor not only granted Harriman the extension, but didn’t even deduct any points for the assignment being late. The professor even added, “Well, life happens” as a message of hope.

To make matters worse, according to Ohio State’s people finder, Harriman is a journalism student. Because why wouldn’t someone who expects the entire world to revolve around her emotions, rather than hard and fast deadlines and objective truths, study journalism?

Apparently, modern college students will use any excuse possible to avoid being held responsible for not doing their work: from President Trump winning the election, to disagreeing with grand jury decisions, and even being emotionally unhinged after a typical college breakup.