Parkland survivor and Second Amendment activist Kyle Kashuv took a right of passage among legal gun-owning families. He went to a gun range with his dad in order to learn how to safely handle a firearm. Little did he know that he would be persecuted for it.

Last Friday, Kashuv posted several tweets with pictures and videos detailing him learning about firearm safety, as well as firing a gun for the first time. 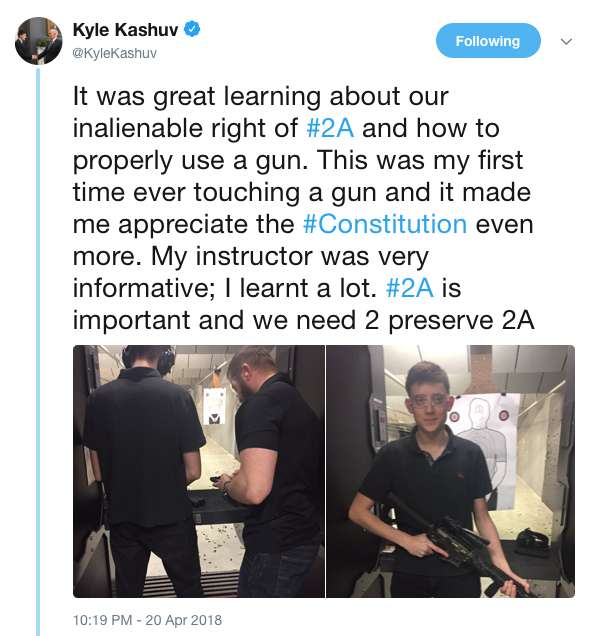 You can see the the videos Kashuv posted to Twitter here.

Seems pretty harmless. Kashuv is just learning how to properly use a weapon. According to Kashuv, not everyone saw it that way.

Kashuv told the Daily Wire that he was pulled out of class on Monday in order to meet a man he didn’t know in one of the Marjory Stoneman Douglas High School’s offices.

“I didn’t know Mr. Greenleaf, but it turned out that he was an armed school resource officer,” Kashuv said. “I went down and found him, and he escorted me to his office.”

That’s when Kashuv’s confusion about what was happening to him began.

Kashuv stated that “Mr. Greenleaf” and a “second security officer” began “agressively” questioning him despite both the officer’s admission that Kashuv had done nothing wrong.

First, they began berating my tweet, although neither of them had read it; then they began aggressively asking questions about who I went to the range with, whose gun we used, about my father, etc. They were incredibly condescending and rude.

It’s understandable to question a student who posts gun videos or pictures to their social media. But, Kashuv’s pictures and videos were documenting the educational experience of using a firearm safely. You’d think adults would be able to tell the difference, but when those adults have an agenda, they become blind to reason.

Kashuv then said that a Broward County Sheriff joined the interrogation of a kid that probably scared by this point, wondering what he had done wrong.

Here’s Kashuv’s take on what happened once the third officer entered the room:

At that point, I asked whether I could record the interview. They said no. I asked if I had done anything wrong. Again, they answered no. I asked why I was there. One said, “Don’t get snappy with me, do you not remember what happened here a few months ago?”

They continued to question me aggressively, though they could cite nothing I had done wrong. They kept calling me “the pro-Second Amendment kid.” I was shocked and honestly, scared. It definitely felt like they were attempting to intimidate me.

When school officials and officers — from the same sheriff’s office that failed to prevent the Parkland shooting tragedy — “intimidate” and scare a kid that has done nothing wrong, who’s there to police the authorities?

“I was treated like a criminal for no reason other than having gone to the gun range and posted on social media about it,” Kashuv’s statement concluded.

Kashuv even provided the Daily Wire with a photo of the hall pass that summoned him to Mr. Greenleaf’s office.

Should Kashuv’s story prove valid — and the kid has no reason to lie about something like this — when does the investigation of Marjory Stoneman Douglas High School officials and the officers involved begin?