The far-Left promotes a fascist agenda while masquerading as “anti-fascist.” For them, basic human decency is a right only extended to people that think exactly as they do. They have no problem attempting to ruin the lives of those that don’t fall in lockstep with their cultish conjecture.

Fiery Conservative Review commentator and host Gavin McInnes will probably have to change his phone number after the pro-Antifa, pro-fascism activist group Smash Racism DC tweeted out a picture of a small dog with McInnes name, his phone humber and a caption that read, “tell him you love white genocide.”

A Twitter page for Smash Racism DC conveniently tucked the McInnes doxxing in amongst a bravado-filled thread concerning running Sen. Ted Cruz and his wife Heidi from a restaurant while they were eating dinner Monday evening.

Without further ado, here’s are the posts with McInnes’ phone number edited out. (These tweets were deleted during the writing of this blog): 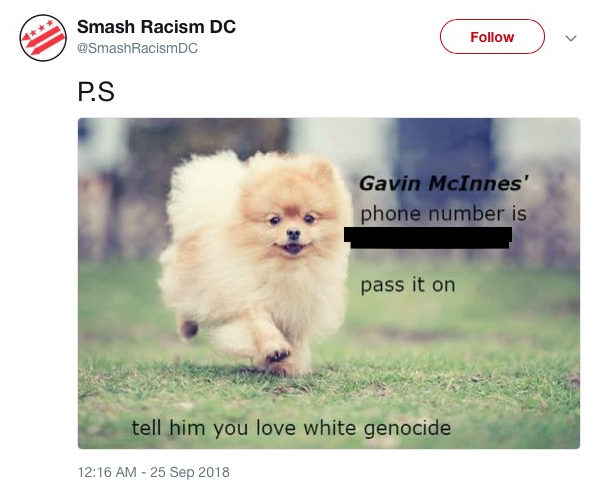 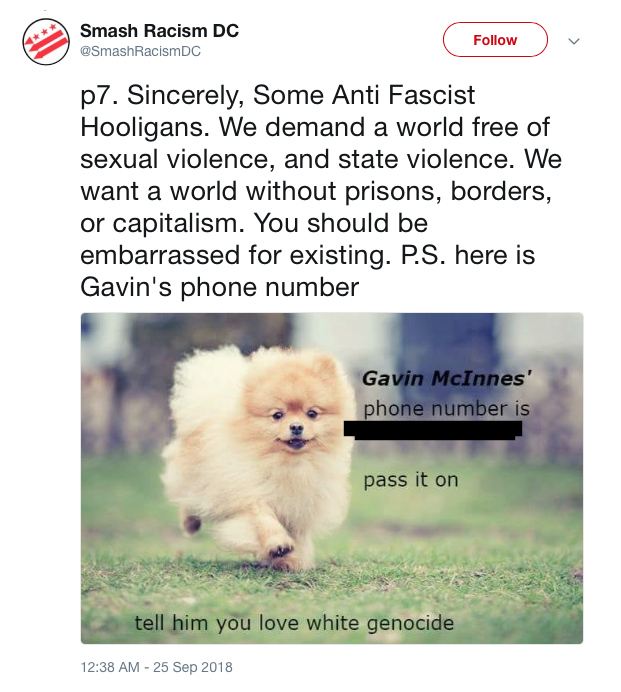 I would call these people disgusting, but that would be offensive to people that actually are disgusting. The group even sent out a now-deleted tweet with a threat towards "Ted Cruz, Bret [sic] Kavanaugh, Donald Trump" and anyone else that isn't one of their sheep:

Smash Racism DC’s “action” is cowardly at best considering they must know that McInnes can’t respond on Twitter to their doxxing of him since Twitter banned McInnes from their site over a month ago.

Someone answered these Twitter users call. As said earlier, this blog was being written when the posts were either deleted or taken down by Twitter.

McInnes may say some controversial things at times, but at least he tells it like it is. His brand of political analysis might not be for everyone, but that’s not an excuse to essentially dox him and open him up for more constant harassment.

Smash Racism DC has two hashtags on its Twitter profile that are very telling about who these people really are: #Antifa and #AbolishICE. If you’re looking to gauge just how radical this organization is, there’s not much more proof needed than this.