Fresh out of new ideas that are at least halfway original and witty, feminists desecrated states of the Virgin Mary and Pope Francis this week during a “play” in Argentina, apparently at least partly in support of abortion.

The U.K.’s Daily Star reports the whole nauseating display (seriously, if you’re going to get naked on a stage in front of God and everyone, at least do a few sit-ups first, maybe a squat or two) was part of a theater production called “Dios” and aired during a yearly festival in northern Argentina. The Daily Star explains:

The original production called Dios (God) was organised by the cultural centre of the city of Rafaela, in the northern Argentina province of Santa Fe.

The play was shown during an annual theatre festival which has been held in the city over the last 15 years.

During the show, a group of naked performers reportedly danced in front of a statue of the Virgin Mary and hugged a statue of Pope Francis while wearing green handkerchiefs with the symbol of the pro-abortion movement in Argentina.

The play mocked a traditional Catholic mass, beginning with the communal singing of hymns. Afterward, as the female participants stripped and danced around like buffoons, they invited the audience to join them on the stage.

Here's some unwanted visual proof (sorry about your eyes): 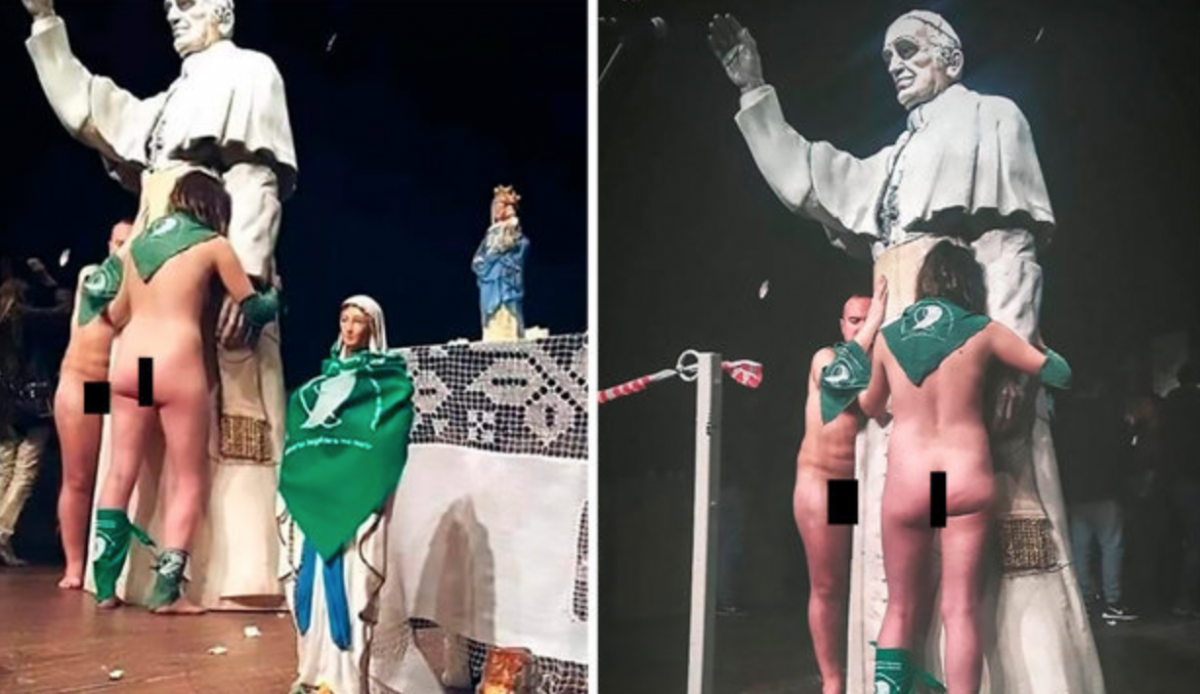 The play caused a bit of an uproar in the community, a totally understandable response given that a) the entire thing was about as distasteful as watching your grandma take a shower and b) the vast majority of Argentineans identify as Catholic.

But when it comes to feminists trying to get their unintelligible point across, this is just par for the course. After all, crazy pro-abortion women have a long history of stuff like taking off their tops and proceeding to disrupt the Pope’s prayers, crash a Mass, and steal Baby Jesus figuresfrom Nativity displays. (Links are there for verification – I don’t suggest you click them.)

It must really suck to be that desperate for attention.