Private Space Exploration Is Leaving NASA In the Space Dust...So Why Are We Funding It?

In an interview with TheStreet on Thursday, Boeing CEO Dennis Muilenburg brazenly claimed that Boeing will beat Elon Musk’s SpaceX to Mars.

"I firmly believe that the first person to step foot on Mars will get there on a Boeing rocket," Muilenburg vowed. Boeing is planning on partnering with NASA to work on this project.

Elon Musk took to Twitter to respond, challenging “Do it.” 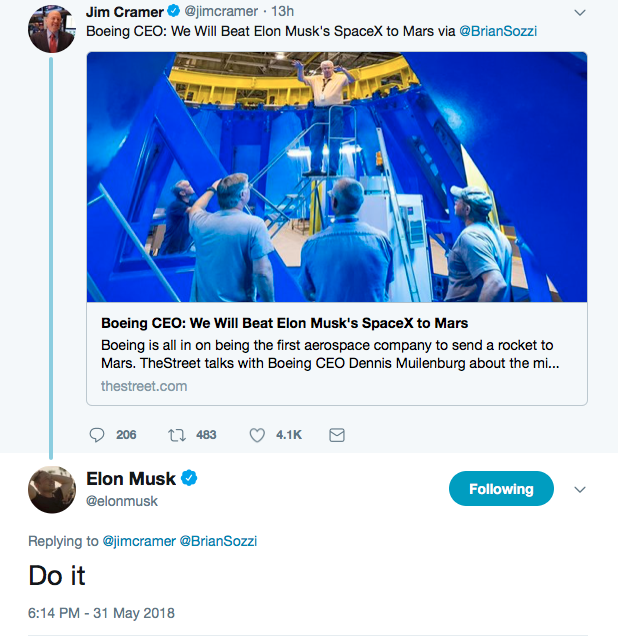 Musk has been working on sending a rocket to Mars for 16 years, and is making serious strides. In 2012, Musk stated that his plan is to have humans on Mars by 2027, and his SpaceX Raptor engine is making progress, but Muilenburg still believes that Boeing will beat Musk to Mars.

But regardless of which company first plants human feet on the Red Planet, perhaps one of the biggest takeaways is just how quickly private space exploration has overtaken solely publicly-funded projects.

It's clear NASA is unable to sustain space exploration missions on its own. That's why the program ended in 2011, and why they need to partner with Boeing to keep working.

So why continue to use billions of taxpayer dollars when SpaceX is making such huge strides almost entirely on their own? If there is interest, drive, and success within the private sector to go to space, why flood government programs with taxpayer money to do a poorer job?

Then again, that is the typical government way.