The Hill reported that several women accusing President Trump of past incidents of sexual harassment gathered for a press conference on Monday, calling for Congress to open up investigations into their claims.

Although more than 12 women have accused the President of alleged sexual misconduct, only three appeared at the press conference.

But behind the scenes, the conference was hosted by progressive media and campaign company Brave New Films. And their company logo seems awful familiar: 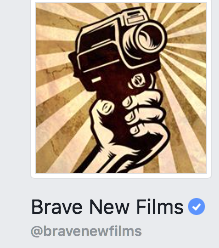 Ah, that's right, because it's derivative of Communist propaganda:

The Daily Wire reported that the company is funded by leftist billionaire mega-donor George Soros.

During the conference, the women stressed that they believe the President should be judged in the court of “public opinion” instead of an actual court.

Watch the press conference below: