Trump on 'Liberal Hollywood': 'They Are the True Racists,' 'Very Bad For Our Country'

In light of the media, Hollywood and leftist politicians making their official stance that all Trump supporters are racist white supremacists, President Donald Trump took to Twitter to let them know who some of the people are who he deems racist — “Liberal Hollywood.”

Trump tweeted on Friday afternoon that “Liberal Hollywood is Racist” and how they always like to call themselves “Elite.” 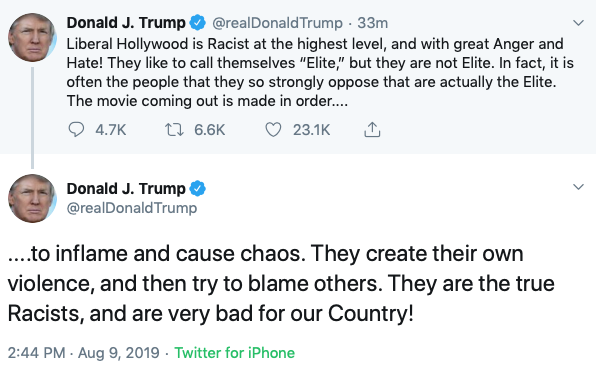 Most likely, the reason that Trump put the word “Elite” in quotes is in reference to the controversy surrounding a new Blumhouse movie being released by Universal Pictures called, “The Hunt.”

Basically, the movie’s premise is that a group of people deemed “The Elite” gathers up people who they deem “deplorable,” drug them and put them in an area where they are then the prey in a hunt.

According to The Hollywood Reporter:

"Did anyone see what our ratf**ker-in-chief just did?" one character asks early in the screenplay for The Hunt, a Universal Pictures thriller set to open Sept. 27. Another responds: "At least The Hunt's coming up. Nothing better than going out to the Manor and slaughtering a dozen deplorables.”

In the aftermath of mass shootings within days of one another that shocked and traumatized the nation, Universal is re-evaluating its strategy for the certain-to-be-controversial satire. The violent, R-rated film from producer Jason Blum's Blumhouse follows a dozen MAGA types who wake up in a clearing and realize they are being stalked for sport by elite liberals.

As for his Friday afternoon tweets, Trump pulled no punches and essentially called “Liberal Hollywood” a bunch of “racist” hypocrites.