Popular PragerU host and commentator Candace Owens claimed Friday morning that Facebook had suspended her nearly-1 million-follower Facebook page for a week for claiming in a post that “liberal supremacy,” not white supremacy, is the true threat to black Americans.

“My @facebook page has been suspended for 7 days for posting that white supremacy is not a threat to black America, as much as father absence and & liberal policies that incentivize it, are. I am censored for posting the poverty rates in fatherless homes,” Owens wrote in a tweet directed at President Donald Trump.

My @facebook page has been suspended for 7 days for posting that white supremacy is not a threat to black America, as much as father absence and & liberal policies that incentivize it, are.

I am censored for posting the poverty rates in fatherless homes. pic.twitter.com/Yh9DSW6DPk

Owens also included a screenshot of the post that apparently got her page, which sported 993,000 followers, temporarily booted for going against Facebook’s “community standards.” The post included a tweet she'd published breaking down poverty rates among black Americans and attributing many problems in minority communities to fatherless households. 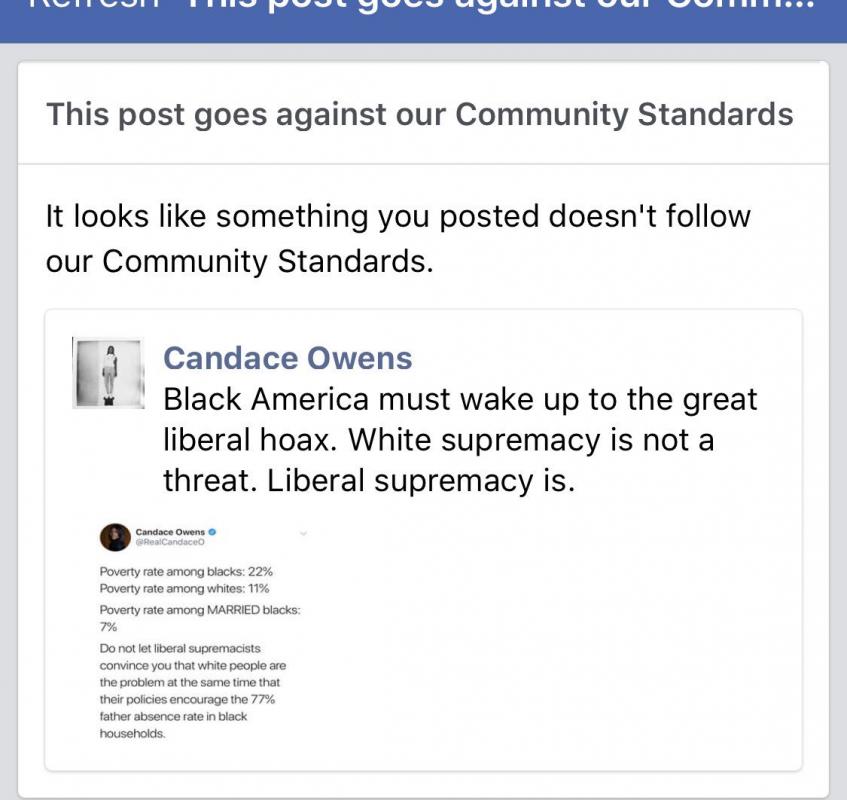 Owens also rightly pointed out that despite her page being suspended, Facebook hasn't levied the same penalty on pages that accuse Trump and his supporters of being white supremacists.

Facebook has allowed every post that has falsely and horribly accused @realDonaldTrump of white supremacy to remain on its platform.

But when a black woman begins discussing the TRUTH—which is that liberal policies have systematically ruined black homes—they censor.

Owens, who also leads a campaign she’s dubbed “Blexit” urging black Americans to reject the Democrat Party, became a rising star on the right for her YouTube videos calling out liberal policies on issues like illegal immigration, abortion, and the growing welfare state, criticizing them for their historical detrimental effects on black communities. After spending more than a year as communications director for Turning Point, USA, Owens recently announced she was leaving the job to focus on her new web-based show for PragerU.