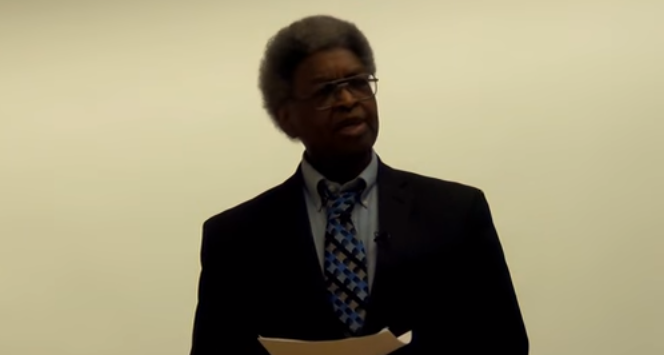 A professor at Portland Community College (PCC) in Oregon was filmed last week saying that a “good world” would be “a world without whiteness.”

Professor James Harrison works in the history department and teaches a class called “Race and Racism.”

'Imagine all the people living life in peace.’ John Lennon penned these words in 1971, and my interpretation is that he’s talking about imagine everyone living together in peace. That would be, not necessarily a perfect world, but a good world. And how do we get to that good world is the question. A world without conflict, and to me my interpretation of these words, is it would be a world or U.S. without whiteness in terms of the power structure.

“And it [whiteness] is a social category,” said Harrison. “A social category is a group of people who share common characteristics, but they may never interact with each other.”

By that logic, wouldn’t “blackness” be a “social category,” too? Or any other color for that matter? It’s pretty funny that the guy crying racism is a pretty big racist.

Whiteness History Month: Context, Consequences and Change is a multidisciplinary, district-wide, educational project examining race and racism through an exploration of the construction of whiteness, its origins and heritage. Scheduled for the month of April 2016, the project seeks to inspire innovative and practical solutions to community issues and social problems that stem from racism.

Whiteness History Month Project, unlike heritage months, is not a celebratory endeavor. It is an effort to change our campus climate. The Project seeks to challenge the master narrative of race and racism through an exploration of the social construction of whiteness. Challenging the master narrative of traditional curriculum is a strategy within higher education that promotes multicultural education and equity.

Harrison then began spewing his idea of “white privilege.”

Ummm…Paula Dean, Michael Richards, Mel Gibson, Hulk Hogan and Donald Sterling ring any bells? They’re white, and I didn’t see them get any “white privilege” after making racist comments. Dean and Hogan were fired from their respective jobs and lost endorsements. Richards and Gibson were ostracized in Hollywood. Sterling was forced to sell his NBA team. Harrison’s point falls flat here.

We sometimes wonder how and why young people are being indoctrinated at an alarming rate. Well, here you go. This is just another example in a very long line of universities and colleges that have become nothing more than indoctrination centers.

To watch the portion of the lecture where Harrison brings up “whiteness,” watch below: